The US Department of Justice (DoJ) has issued a new superseding indictment against WikiLeaks founder Julian Assange. But the indictment fails to disclose crucial information as generally required under UK law.

This failure could be seen as highly prejudicial and therefore present another opportunity for the defence to lodge a challenge to the extradition request.

On 24 June, the DoJ released a statement accusing Assange of conspiring with “Anonymous” affiliated hackers, among others. A 49-page document accompanying that statement provides further details.

According to Shadowproof’s Kevin Gosztola, the document, one-third of which merely reiterates the original 18 charges, significantly:

expands the [original] conspiracy to commit computer intrusion charge and accuses Assange of conspiring with “hackers” affiliated with “Anonymous,” “LulzSec,” “AntiSec,” and “Gnosis.”

The computer crime charge is not limited to March 2010 anymore. It covers conduct that allegedly occurred between 2009 and 2015.

In the document, the DoJ identifies a witness, simply referred to as “Teenager”. According to WikiLeaks, that witness is a convicted felon, child abuser, and an FBI informant:

The 'Star Witness' of the new superseding indictment is a diagnosed sociopath/ convicted conman/ child abuser/ FBI informant who was found guilty in Iceland of impersonating #Assange https://t.co/Gd249hthhj

It was just over a year ago that WikiLeaks forewarned that the DoJ would likely use this “Star Witness”, who it claimed was central to an FBI entrapment operation:

Press Release: DoJ preparing to file additional indictment against Assange.
The Trump´s DoJ is so desperate to build its case against Assange that it is using as star witness a sociopath, convicted conman and sex criminal, involved in an FBI entrapment operation against WikiLeaks pic.twitter.com/DX0hIDSJRr

In its accompanying press release, WikiLeaks named this “Star Witness” as Sigurdur (‘Siggi’) Thordarson. WikiLeaks pointed out how Thordarson had served time in prison for paedophilia (involving nine boys) and additionally two years imprisonment on 18 charges of embezzlement, theft, and fraud.

Birgitta Jonsdottir, an Icelandic MP with the Pirate Party who worked on the WikiLeaks’ ‘Collateral Murder‘ video, commented:

When Julian met him [Thordarson] for the first or second time, I was there. And I warned Julian from day one, there’s something not right about this guy… I asked not to have him as part of the Collateral Murder team.

Monsegur worked for the FBI to entrap anarchist activist Jeremy Hammond via the Stratfor hack, though ultimately to try and implicate Assange too.

Daily Dot quotes Monsegur’s lawyer regarding his relationship with the FBI:

The government tracked everything he typed with a key-logging program,” attorney Peggy Cross-Goldenberg told the court. In addition to monitoring his Internet activity, the FBI installed a camera in his house to provide constant video surveillance. Judge Loretta Preska, who repeatedly praised Monsegur’s “extraordinary level of cooperation,” described the relationship as “virtual around-the-clock cooperation where Mr. Monsegur was sitting with agents.”

Hammond claims that Monsegur’s hacking ops were not only sanctioned by the FBI but were on behalf of the Feds:

What many do not know is that Sabu was also used by his handlers to facilitate the hacking of targets of the government’s choosing – including numerous websites belonging to foreign governments.

The documents hacked from Stratfor were leaked to WikiLeaks and became known as the Global Intelligence Files. Hammond was jailed for 10 years for his part in the Stratfor hack. However, Monsegur, who worked with the FBI for approximately three years, was sentenced to just time served (seven months).

According to World Socialist Web Site, in early 2011 Thordarson contacted Lulzsec to see if it could help hack into Icelandic government departments. At that point in time, Sabu was working with the FBI. To prove he was a bona-fide WikiLeaks worker Thordarson uploaded to Lulzsec a video that showed Assange in a room at Ellingham Hall, where he was staying while on bail, interspersed with Thordarson’s and Sabu’s chat logs:

In effect, the alleged hacking operation was instigated and carried out by two FBI informants (Thordarson was later paid $5,000 by the FBI) apparently to entrap Assange (he subsequently denied all knowledge of the op).

These alleged email exchanges between the FBI and Thordarson talk of payment. According to Thordarson a receipt was provided by the FBI to Thordarson for delivery of “1TB of data across eight hard drives that included chat logs, videos, documents, pictures, and other related data to WikiLeaks“: 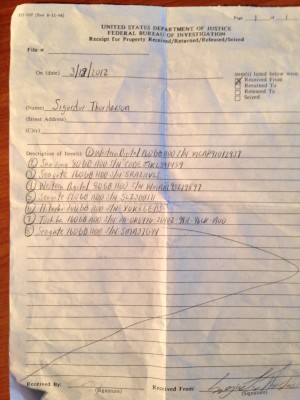 According to the US Office of the Attorney General, informants are expressly forbidden from engaging in entrapment. They also cannot “initiate or instigate a plan or strategy to commit a federal, state or local offense”. The evidence suggests that Thordarson and Monsegur clearly violated those rules.

Furthermore, in the UK context, unless there are exceptional circumstances, an informant’s identity is generally required to be disclosed to the courts as, according to the Crown Prosecution Service, openness of judicial proceedings is:

a fundamental principle enshrined in Article 6(1) of the European Convention on Human Rights (the right to a fair trial). This underpins the requirement for a prosecution witness to be identifiable not only to the defendant, but also to the open court. It supports the ability of the defendant to present his case and to test the prosecution case by cross-examination of prosecution witnesses.

The US superseding indictment, lodged with the UK court, fails to disclose information regarding the true identity of key witnesses, full details of their role as FBI informants; or their criminal background. In doing so, rather than enhancing the prosecution case, the superseding indictment arguably undermines it, thus providing Assange’s lawyers with a potential legal challenge to the extradition.

That challenge, together with other alleged flaws and errors in the US case, and UK procedural irregularities, could result in a request to dismiss the extradition case.