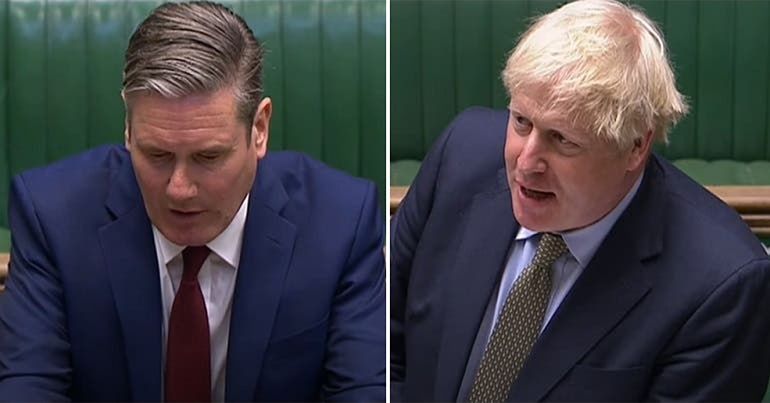 At PMQs on 2 September, Labour leader Keir Starmer asked prime minister Boris Johnson about the u-turns by his government regarding the coronavirus (Covid-19) pandemic, and in particular about students’ return to schools. But Johnson suddenly changed the subject and claimed Starmer “supported an IRA-condoning politician” (presumably he meant Jeremy Corbyn).

In response, Starmer made no attempt to defend the former Labour leader regarding the IRA – although a Channel 4 News fact check tries to dispel a few myths. Instead, he curtly responded:

I worked for five years with the Police Service of Northern Ireland, as director of public prosecutions, prosecuting serious terrorism, working with the intelligence and security services, and the police.

The attack by Johnson was perhaps typical of his style: refuse to answer a question that might expose his failings and instead go on the offensive. But his choice of subject – Irish republicanism – was bizarre to say the least.

However, politics is rarely straightforward. A bill, now due a second reading, would drastically limit the prosecution of UK troops accused of war crimes.

So, what are the specifics? The Overseas Operations (service personnel and Veterans) Bill intends that any alleged crimes committed by UK military personnel more than five years ago are made immune from prosecution. Specifically, the bill includes:

a presumption against prosecution in respect of alleged offences committed on overseas military operations more than five years ago, pursuant to which decisions to bring proceedings in such cases will be ‘exceptional’.

The bill also requires that the courts consider “the operational context when deciding whether to extend the normal time limits” for civil personal injury or death claims, as well as for “claims under the Human Rights Act (HRA) in connection with overseas operations”. In other words, the court can decide that a claim against UK personnel should not proceed should the circumstances regarding the alleged crime mitigate that crime. There will also be a new restriction of six years for “civil claims for personal injury or death and for bringing HRA claims in connection with overseas operations”.

Furthermore, UK governments will be “compelled to consider derogating from the European Convention on Human Rights (ECHR) in relation to significant overseas military operations”. But policy and campaigns manager at Liberty Sam Grant points out that: “Derogation will not prevent the proper investigation of credible allegations of abuse during wartime: it is simply not possible to derogate from the right to life or the prohibition on torture”.

Meanwhile, Labour is demanding that the bill be paused.

Also, it should be noted that the International Criminal Court (ICC) is continuing to investigate cases alleging war crimes – including murder, torture, and rape – by British military.

In regard to alleged mistreatment and unlawful detention by UK troops between 2009 and 2013, the Ministry of Defence (MoD) admitted it has paid $26m “in 326 cases brought before the UK courts”. Moreover, “In a further 1,145 cases, $2.8m had been paid out by British military officers in Iraq”. The MoD further admitted that “since 2017 the number of claims had risen to more than 4,400”.

And there are still many unresolved claims against Britain by victims and their families in Iraq and Afghanistan claiming torture and murder.

While the Overseas Operations (service personnel and Veterans) Bill also references the north of Ireland, the introduction to the bill explains that the government intends to:

introduce separate legislation to address the legacy of the past in Northern Ireland in a way that focuses on reconciliation, delivers for victims, and ends the cycle of re-investigations into the troubles that has failed victims and veterans alike, ensuring equal treatment of Northern Ireland veterans and those who served overseas.

However, in an accompanying statement by secretary of state for Northern Ireland Brendan Lewis it’s further explained that:

Only cases in which there is a realistic prospect of a prosecution as a result of new compelling evidence would proceed to a full police investigation and if necessary, prosecution. Cases which do not reach this threshold, or subsequently are not referred for prosecution, would be closed and no further investigations or prosecutions would be possible – though family reports would still be provided to the victims’ loved ones.

It’s claimed that for the north of Ireland “about 900 cases involving 1,200 deaths still remain unresolved, nearly a third of which involve army personnel”. The ‘Dirty War’ goes back decades and spawned covert infiltration units such as the Military Reconnaissance Force, later renamed the Special Reconnaissance Unit and the Force Research Unit (FRU).

In July 2016, The Canary reported on restricted testimony by an FRU member, who claimed that the organisation infiltrated Irish paramilitaries to carry out attacks. More recently, The Canary also reported on claims of collusion by British military in the 1971 attack on McGurk’s bar, which saw 15 people dead and 16 injured.

It’s not clear if investigations into these and similar atrocities will be closed down under the terms of the proposed legislation. Given the failure and subsequent closure in 2014 of the Historical Enquiries Team, which was set up in 2005 to re-examine 3,260 murders, such concerns are valid. Its successor, the Historical Investigations Unit, has been consulted regarding the new legislation.

However, it’s claimed by north of Ireland police service chief constable Simon Byrne that examination of all outstanding cases, starting from now, would take “over 20 years”. Hardly reassuring, and no doubt an indication as to how the new legislation will likely – and ruthlessly – be applied.

The issue of whether UK military in the north of Ireland should be immune from prosecution via new legislation was raised in May 2019 by defence secretary Penny Mordaunt.

any attempt to create immunity for the British Army was wrong. No British soldier should be above the law and whether crimes have been committed in Ireland or Iraq, those crimes should be investigated and those responsible held to account.

Indeed, if British troops are seen as above the law, they will not be able to safely operate without the support of the international community. Or as former lieutenant colonel Nicholas Mercer puts it:

…officers are concerned that, not only do the proposals undermine international law, but also potentially encourage other rogue nations to follow suit… A professional army complies with the rule of law rather than circumvents it.

Clearly, the current Tory government fails to understand that.