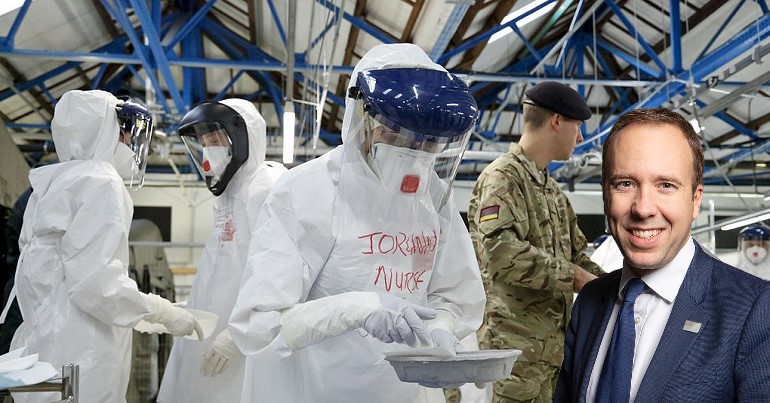 Health secretary Matt Hancock has reportedly said nurses’ pay rises will be delayed next year. It comes after an ongoing battle over the pay of these frontline staff. One union has called Hancock’s written decision a ‘Scrooge letter’. But it seems that the news is just another episode in a long line of poor treatment of NHS staff.

Nursing Times reported that Hancock announced the delay via a letter. He wrote it to the NHS Pay Review Body, the organisation which makes recommendations on pay rises. The letter was to give notice to “formally begin pay talks” for next year, Nursing Times reported. In it, he blamed chancellor Rishi Sunak’s recent Spending Review (SR) for delaying nurses’ pay rise. Hancock wrote:

The timing of the SR announcement has unfortunately delayed the commencement of Pay Round 2021/22.

This refers to staff on the Agenda for Change scheme. In other words, a decision won’t be made on frontline staff like nurses’ pay until well into 2021. Nursing Times said that:

staff are unlikely to see extra money in their pockets until the summer.

The Pay Review Body not reporting until May is not unusual. Historically, it often released its reports in March. But in recent years, this has got later. On this occasion, though, it’s the background and context to the delay which matters.

Now it appears that, not only do the Tories think nurses don’t need a decent pay rise, they also think they can wait for the one they’ll give them too. This ignores the reality of life for many frontline NHS staff.

A crisis for nurses

The Guardian reported in September that the think tank the Kings Fund found the:

number of nurses and health visitors leaving their posts in hospitals and community services in England within three years of joining has risen almost 50% since 2013-14 and is now 28%.

The Guardian also noted that:

There are 40,000 vacancies for nurses in the NHS in England alone.

Many NHS trusts in England provided free food, drink and parking for staff during the pandemic, including rest hubs and “wobble rooms” where distressed staff could seek support. However, some of these initiatives have recently been discontinued, to the displeasure of staff.

At a time when nursing staff are already under severe strain and the profession is in crisis, the government’s decision is appalling. GMB union national officer Rachel Harrison told the London Economic:

The Health Secretary’s ‘Scrooge’ letter in the week before Christmas will leave NHS workers worried that they will not receive the fair pay rise next year that they were promised,

It is outrageous that this letter has been slipped out late on a Friday when ministers hoped that attention was elsewhere.

Indeed. Now nurses and other frontline NHS staff will have to wait to see their fate decided.