The government has voted against protecting women - The Canary 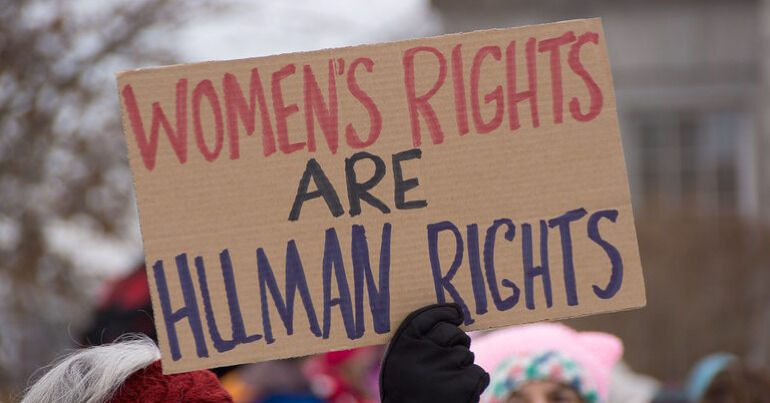 The Tory government’s rejection of key amendments to the Domestic Abuse Bill has, once again, shown its misogyny and racism. On Thursday 15 April, the government voted against vital House of Lords amendments which would have given women more safety and would have monitored perpetrators of domestic abuse.

Voting against a national register of serial abusers and stalkers

In the UK, a woman is murdered by a man every three days. Of these women, 62% are murdered by men who are currently, or have previously been, in an intimate relationship with them. Women are most likely to be murdered in their own homes, showing that a home is most definitely not a safe haven. Meanwhile, “almost one in five women” will be stalked in their lifetime.

Despite these facts, 350 Conservative MPs – including Boris Johnson and Priti Patel – voted against putting serial domestic abusers and stalkers on a national register. Just two Tories voted in favour. The amendment would have been key to protecting women from violence, something that Patel claimed she was “determined” to tackle in the wake of Sarah Everard’s murder. In fact, Patel previously said:

there is something about perpetrators and their serial offending that has to be addressed, there is no question about that at all.

We know that one of the clearest predictors of abuse is a history of abusive behaviour. Tories showed their total disregard for women’s safety by voting against a register for domestic abuse perpetrators which would have included a strategy for monitoring perpetrators and prevention of further abuse. We have to ask, whose interests are they protecting?

It’s perhaps less surprising that the Tories also voted against giving migrant women equal protection against perpetrators. Migrant victims of abuse have no recourse to public funds and can’t access women’s refuges. They can’t report domestic abuse to the police for fear of their data being shared with immigration enforcement. The amendments argued for what Step Up Migrant Women UK called:

the inclusion of safe reporting mechanisms into the Bill to ensure migrant survivors can report abuse to the police and access support without the fear of any immigration enforcement.

When the amendments were rejected, Southall Black Sisters released a statement, saying:

Voting against judges being specially trained in domestic abuse cases

The same politicians united together to vote against yet another amendment which might have led to more perpetrators being found guilty of abusing women. The amendment would have ensured that judges and magistrates were provided with specialist training “concerning rape, sexual and domestic abuse and coercive control”, including being trained in survivors’ trauma, as well as being educated in the risks that survivors face when giving evidence against perpetrators.

We continually see family court judges making bad decisions due to their ignorance around domestic abuse, often falling for the manipulations of the perpetrator and putting women and children in dangerous situations. How an amendment to educate people who have such power over other people’s lives could be voted down is unfathomable.

These rejections of amendments to the Domestic Abuse Bill are yet another example of the complete disregard that the Tories have towards both women in general and migrant women in particular. They are, evidently, very intent on upholding their hostile environment. This government can only be trusted to look out for its own, and that certainly doesn’t include Women of Colour.

Stevens argues that we need radical change, tackling the structural and societal reasons for domestic abuse and educating young people on patriarchy and misogyny:

What we desperately need is more work to change societal values. We live in a society that raises men to believe they must dominate women and that it’s acceptable to abuse them to maintain control. Misogynistic attitudes and outdated gender norms must be challenged wherever they arise and we must educate children and young people before these beliefs can get a hold.

At the same time, we need to fight against institutional racism and build a radically different society where migrant women’s lives matter. We also need to tackle the root causes of poverty, since domestic abuse intersects with homelessness too. It’s clear these radical changes needed won’t come from our government. It’s down to us.