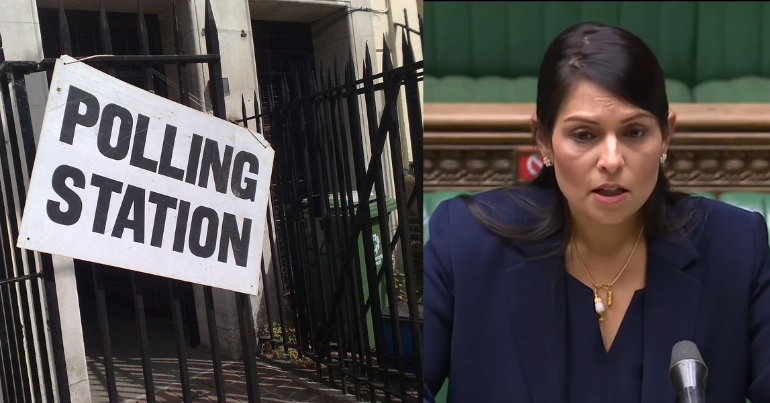 After a weekend of Conservative gains in elections around the country, the left has suffered losses up and down the UK.

But the results only confirm what electoral reform campaigners have known for a while: the UK must change its voting system.

The UK is the only country, bar Belarus, in Europe that uses First Past the Post (FPTP). The system has long been criticised as failing to represent thousands of voters and allowing right-wing parties to dominate.

Under FPTP, used for the UK’s Westminster and local elections, everyone votes for one candidate for their local ward or constituency. The winner is simply the candidate with the highest number of votes in that area.

The problem is that parties can receive support from thousands of voters across the country, but if it is geographically spread out, they will come away with nothing. For example, in the 2019 general election the Greens received more than 865,000 votes.

They took just one seat.

Parties with strong nationalist appeal, like the SNP and DUP, tend to do better under FPTP, as their support is more geographically concentrated.

This system means that only marginal seats tend to make a difference during elections. And many feel a vote for any candidate other than the winner is a vote wasted. It encourages tactical voting for candidates people may not agree with, in an effort to have their voice heard.

On May 6, the UK went to the polls to vote for local councillors across the UK. It ended in disaster for Labour, which lost control of eight councils. The Conservatives, meanwhile, gained control of 12.

One of the councils the Conservatives took was Cornwall, previously run by a coalition of Lib Dems and Independents. Tories took 47 of the 87 seats on the council, which is 54%. But they only received 37% of the vote.

About 12% of Cornwall’s electors (37% of those who actually voted) voted Conservative this week. But the Conservatives took 54% of the seats and therefore 100% of the power to now run the Council for the next 4 years. I do not believe this is what the majority of people think is either right or satisfactory.

All nine seats up for grabs on Redditch Borough Council were taken by Tories. According to the Electoral Reform Society, this was despite the Conservatives only receiving 56.2% of the vote overall. These discrepancies were reflected in several councils, and not just for the Conservatives.

No party should sweep the board on a minority of the vote. It’s a recipe for poor representation, disengagement, and a growing divide between communities and their councils. Instead, we need vibrant, diverse town halls that reflect our communities.

As we’re increasingly finding out, areas that are deemed ‘unwinnable’ by governing parties tend to get left to wither on the vine. These one-party-takes-all outcomes are a deadweight on our democracy.

Proportional representation refers to any voting system where the share of seats a party wins reflects the share of votes it receives.

Evidence suggests countries that use proportional representation instead of majoritarian systems (like FPTP) tend to elect more progressive governments.

In every industrialised parliamentary democracy with majoritarian electoral institutions, averaging over the postwar period, the legislature has been well to the right of the voters, and in most cases, the cabinet has been even further to the right.

Greens, Lib Dems and yes, even UKIP, have also long been supporters or a proportional system.

Scottish parliament elections use a mixed FPTP and proportional system, which is directly attributed with enabling the SNP to win 64 MSPs in the latest election instead of the 110 they would’ve won under pure FPTP.

One of the few UK elections that doesn’t use FPTP is mayoral elections. Instead, mayors are elected using the supplementary vote system. This system allows voters to mark both a first choice and second choice candidate on their ballot papers.

In stark contrast to the picture for Labour elsewhere, the party took 11 out of 13 of the mayoral positions up for grabs this weekend, with Andy Burnham and Sadiq Khan retaining their seats, and candidates like Tracy Brabin being elected.

Brabin did not secure a 50% majority in the first round of the West Yorkshire mayoral election, so it went to run-offs between her and Conservative candidate Matt Robinson. With second preferences included, Brabin received almost 50,000 more votes which would’ve been wasted under FPTP.

The results followed a similar trend between Sadiq Khan and the Conservative candidate Shaun Bailey in London.

In a move that could disrupt the mayoral trend, Priti Patel has already stated she plans to switch the election of mayors from supplementary vote to FPTP.

This is likely to give the Conservatives a boost, as recent elections show the left in cities has become more fragmented. Without the boost from second votes, left-wing candidates are more likely to suffer from vote splitting under FPTP, while a strong Tory candidate has the potential to unite the right.

This move would undermine our crumbling democracy, be a backwards step, and leave millions of people without a say in politics. We urge the Government to rethink their proposals and give voters a chance to make votes matter at the ballot box with a proportional system.

The Home Secretary claims that this move would bring ‘strong and clear local accountability’, ‘so the public can vote out those who are failing to deliver’. However, this makes no sense, because, under First Past the Post, mayors could easily be rejected by a majority of their voters yet still get re-elected, just because their opponents ‘split’ the vote.

As it currently stands, the UK’s voting system makes it difficult for many people to see candidates into office who really reflect their views. The supplementary vote in the mayoral elections at least gives people a second choice to have a candidate that is somewhat representative of their voice.

Party politics notwithstanding, a move away from FPTP would be a move in the direction of democracy. And it’s one that’s vital if we want people to engage with politics and feel like their votes and their voices count.