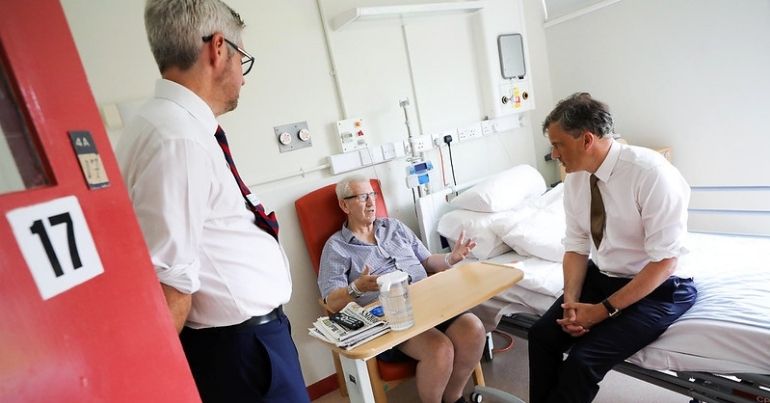 Growing waiting lists for NHS treatment are creating a divide in access to healthcare. The length of lists is forcing many people to turn to private healthcare, while the poorest are left to wait.

Currently, 5.6 million people in Britain are on a list waiting for NHS treatment, with waiting lists having grown by a fifth since the beginning of the pandemic. However, the length of time people are waiting is not equal across the country.

Research shared with BBC Panorama found that waiting lists have grown by nearly 35% in wealthier areas since the start of the pandemic. In contrast, in the poorest areas they have grown by 50%. On top of this, people living in the most deprived areas are almost “twice as likely” to have to wait over a year for treatment.

Health secretary Sajid Javid warned in August that lists could increase to more than 13 million people. Estimates by the Institute of Fiscal Studies for the peak of waiting lists range from nine million to over 15 million.

The NHS is still not operating at full capacity due to treating coronavirus (Covid-19) patients, and will likely also face an influx of patients who didn’t seek treatment during the pandemic.

As a result, a growing number of people are are forced to pay for private healthcare to skip the waiting lists.

Charity Engage Britain commissioned a survey of 4,000 adults that found more than 20% said they have turned to private healthcare because they couldn’t access NHS treatment. One man told the Guardian that dentists told him he’d have to wait three years for removal of a decayed tooth on the NHS. A recipient of Universal Credit, he had to borrow the £600 needed from his family.

Some people have paid a lot more. A 36-year-old woman described to the BBC how she and her partner had to take out a £7,000 loan for her to have private endometriosis surgery. If she hadn’t gone private, she would have faced a two year wait while “she could barely walk”.

While the more affluent in society can afford to make the switch to private healthcare, for the less well off it means going into debt or just having to wait.

According to a poll commissioned by Healthwatch England, 47% of respondents waiting for delayed treatment said going private wasn’t an option for them. One 86-year-old woman described how she felt suicidal during her painful 17-month long wait for a hip replacement.

In many cases, long waits can have deadly consequences. For example, every month cancer treatment is delayed leads to about a 10% higher chance of the patient dying.

The big worry about long waits leading people to have to go private is that it will increase inequalities, but also that many people will be forced to make awful trade-offs over their finances in order to be able to get access to the care that they need when they need it.

And that goes against every grain of why we set up the health service.

Attempts to ease the pressure

Support for the NHS remains strong, with many people attributing its current problems to issues with both a lack of staff and resources. Earlier this month, prime minister Boris Johnson announced the NHS would get £5.4bn through the next six months to start tackling the backlog. However, health charities and campaigners have warned this is nowhere near enough.

The Health Foundation has called for resources to be distributed to assist the most deprived areas that are struggling the most with the backlog. Without significant investment into easing waiting lists, the poorest people face a choice: ignore health concerns or go thousands of pounds into debt.

At the moment, healthcare in the UK is edging towards the kind of inequality the NHS was specifically created to combat.