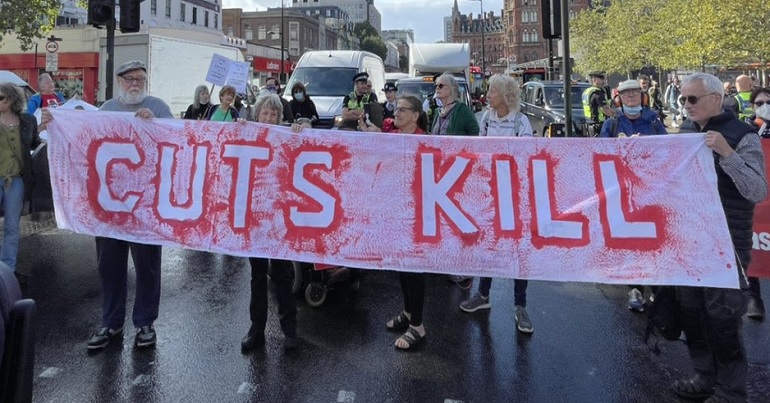 Disabled people brought central London to a standstill on Tuesday 28 September. They were protesting over the Tories’ cut to Universal Credit and the persecution of people claiming other social security benefits. The demo is just one part of a week of action, and the group will be protesting again on Thursday 30 September. This time, they’ll be at Boris Johnson’s front door.

Disabled People Against Cuts (DPAC) is a grassroots activist group. It’s been groundbreaking in terms of its approach to fighting for disability rights. From blocking Westminster Bridge to throwing balls at Boris Johnson via occupying parliament’s central lobby, DPAC has never shied away from taking direct action.

Most recently, DPAC has been at the forefront of fighting against the DWP’s £20-a-week Universal Credit cut. It will hit various people hard, including 660,000 low-paid key workers, 3.4 million children, and six out of 10 lone parent families. The cut will plunge a further 500,000 people, including 200,000 children, into poverty. Trade unions and campaign groups have expressed fury over the cut.

DPAC has been holding a week of action over the cut and Tory/DWP persecution of social security claimants more broadly. It started on Friday 24 September with an online rally:

Since then, there have been local demos and events. And on 28 September, the group brought central London to a standstill.

DPAC held an ‘audio riot’ outside Kings Cross station. It was something that did what it says on the tin:

Awesome message of solidarity with *all claimants* from @jeremycorbyn MP
Please note everyone the ESA/legacy Claimants court case has been moved to November and we will of course share any further updates
Solidarity!#AudioRiot #20More4All #CancelTheCut pic.twitter.com/zoBh06favw

The group blocked Euston Road outside the station to draw attention to the Tories’ actions:

We blocked the road for over 20 minutes outside Kings Cross to make our point to #CancelTheCut and to extend the £20 to people on similar legacy benefits. Disabled people have been treated appallingly – we deserve better! #AudioRiot #20More4All pic.twitter.com/UOcR0N43zP

Overall, the protest was peaceful and without incident. Unlike their conduct at recent Extinction Rebellion (XR) protests, the police seemed unsure what to do with DPAC:

So heard the police like Haribos. So @Dis_PPL_Protest took some on the Kings X protest.
H/T @imajsaclaimant for the picture pic.twitter.com/3gNEt9itil

“United in one voice”

After 18 months DPAC are back. Loud, proud doing what they do best: being back out on the streets; highly visible to the public. We’re here to show the government that we will continue to speak out on the impact of the £20 uplift cut to Universal Credit. And we’re reminding them that legacy benefit claimants were completely ignored and overlooked in the £20 per week uplift during the pandemic. It was beautiful and overwhelming to have the solidarity from the RMT, Unite Community and many other grassroots campaigns: united in one voice.

We will not be silenced or stopped from fighting back. It was a great feeling being out doing what DPAC do best: taking direct action to highlight the narrative of the impact of the government policies on disabled people’s lives. Everyone coming together in support and solidarity was wonderful.

But DPAC isn’t stopping here. On 30 September at 5:30pm, it and other groups will protest outside Downing Street. As it wrote:

So, it seems DPAC is back with a bang. Given the Tories’ toxic attitude to social security claimants, the group’s direct action is needed now more than ever. And the more support we give, the better.