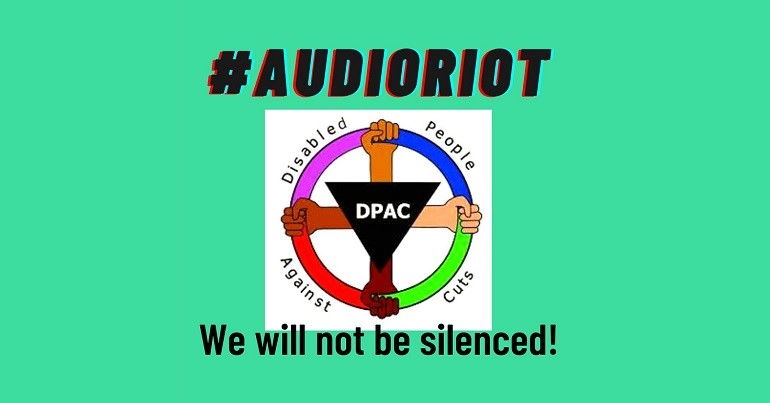 Disabled people will be holding a “riot” on Tuesday 28 September. It’s over persistent Tory and Department for Work and Pensions (DWP) attacks on chronically ill and disabled people and social security. But the group organising it won’t be smashing up the streets. Because, instead, this is an ‘audio riot’.

Disabled People Against Cuts (DPAC) is a grassroots activist group. It’s been groundbreaking in terms of its approach to fighting for disability rights. From blocking Westminster Bridge to throwing balls at Boris Johnson via occupying parliament’s central lobby, DPAC has never shied away from taking direct action.

Most recently, DPAC has been at the forefront of fighting against the DWP’s £20-a-week Universal Credit cut. It will hit various people hard, including 660,000 low-paid key workers, 3.4 million children, and six out of 10 lone parent families. The cut will plunge a further 500,000 people, including 200,000 children, into poverty. Trade unions and campaign groups have expressed fury over the cut.

And DPAC isn’t happy either. It said that:

So, the group is back on the streets – and back telling the Tories that enough is enough.

We predict an audio riot

DPAC is staging its audio riot outside Kings Cross station, in the courtyard in front of it, on 28 September from 11:30am:

Join our #AudioRiot and make some noise about the devastating changes to benefits which will have a huge impact on millions of peoples lives, including disabled people.

Bring everything you can that makes noise.

DPAC will be providing materials for you to take part too – but don’t let that stop you bringing:

DPAC has issued a health warning about the demo. It said:

We suggest that people joining in this action bring along ear protection such as ear plugs or ear defenders, it’s going to be extremely loud and it may damage your hearing without protection. We do will have some ear plugs to hand out to those who don’t have them but we only have a small number, so if you can, bring your own please.

It’s targeting the audio riot around several topics, all DWP-related. It wants people to “make some noise about the”:

There will also be online actions people can take part in. The audio riot forms part of a week of action from DPAC. It starts with an online rally from 7:30pm on Friday 24 September. Local actions will be happening on other days. Then, after the demo on 28 September, DPAC will take the fight to Downing Street. On 30 September from 5:30pm, DPAC and other groups will rally outside Johnson’s front door over the Universal Credit cut. More details can be found here.

Meanwhile, DPAC was meant to be staging a vigil outside the High Court. But this has been cancelled because the court case in question has been delayed:

The vigil was in support of a legal case. As The Canary previously reported, two disabled people are taking the DWP to court. It’s over the department’s failure to apply the £20-a-week increase seen for Universal Credit to legacy benefits like Employment and Support Allowance (ESA). The case will argue that this is discrimination under the European Convention on Human Rights, because the claimants are disabled people. Osbornes Law is representing the claimants.

But the hearing has now been delayed. It was supposed to be on 28 and 29 September. But the High Court has now pushed this back to November. Osbornes Law told The Canary that the court claimed this was due to “judicial availability”; a shortage of judges. The Canary will be looking into this further.

DPAC has called an #AudioRiot series of online rallies, social media activity and street protest to collectively raise our voices. We want to force the government to listen to the impact of £20 per week uplift cut to Universal Credit will have on millions of families. Also, we want to force it to listen to the #20More4All campaign. Because 2.2 million legacy benefit claimants were not included in £20 uplift during the pandemic.

Three quarters of legacy benefit claimants are disabled people, many of whom were shielding. Yet the cost of living rose very high: food prices, energy prices, PPE equipment and online delivery shopping costs. This left disabled people having to make stark choices whether to heat their homes or eat. Being unable to meet the most basic of living costs caused further distress when isolated while shielding.

We are telling the government we will not be silenced on the appalling impact of 12 years of austerity, and the impact of the pandemic which has cost many lives – especially disabled people. So, however people can, support us online and on the street. Let’s make lots of noise and tell this government enough is enough.

DPAC has a history of inventive direct action. It’s able to raise the profile of surrounding disability rights and social security issues in a way many other groups can’t. So, if you can take to the streets on the 28 and 30 September in solidarity, then do so. Because the Tories and DWP need to know that we won’t take their callousness lying down.