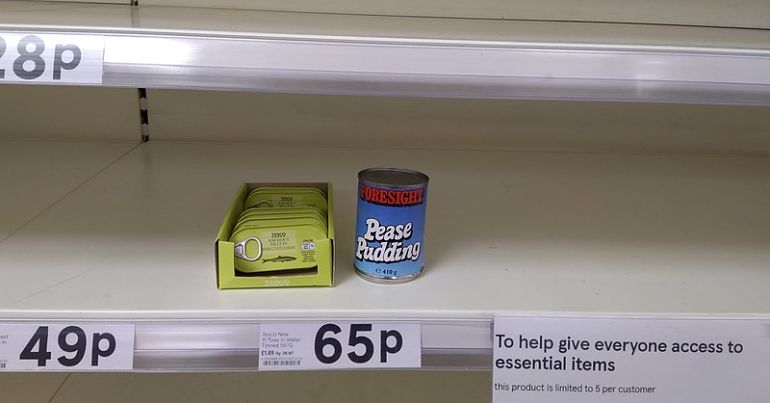 With Christmas a couple of months away, there are signs the festive season will be a lean one.  We’re already seeing some of the consequences of a triple whammy of supply shortages, prices rises, and income lowering. Inevitably, poor people will be hit the hardest.

A ‘winter of discontent’ has been predicted, though not the degree of protest or anger that this may elicit.

which have been exacerbated by the coronavirus and Brexit, have resulted in household names like McDonald’s, Gregg’s, and the Co-op running out of certain items in recent weeks, with the disruption expected to worsen in the coming weeks in the run-up to Christmas.

In August, Iceland managing director Richard Walker warned that Christmas could be cancelled. Co-operative Group chief executive Steve Murrells blamed Brexit and coronavirus. The Confederation of British Industry, the body representing UK businesses, also blamed coronavirus and Brexit for the shortage of workers and disruption of transport. Provision Trade Federation director general Andrew Kuyk said that the gaps on supermarket shelves were caused by supply chain staff shortages. And retail stocks are reportedly at “their lowest since 1983”, according to the Mirror.

There’s also news of shortages in the supply of toys, exacerbated by shortages of HGV drivers. Moreover, driver shortages could disrupt bin collections. And a lack of HGV drivers is also blamed on fuel shortages, leading to some garages closing down. Hanna Hofer, BP’s head of UK retail, said the company only had “two-thirds of normal forecourt stock levels required for smooth operations”. She added that the level was “declining rapidly”.

Furthermore, on 21 September, iNews reported that Food and Drink Federation chief executive Ian Wright said products such as chicken, pork and bakery goods could “start to run out” in 10 or so days. At the time of writing, that’s less than a week away.

Significantly, HGV drivers are not included in the list of jobs eligible for the Skilled Worker visa. The government is now reportedly considering a temporary visa scheme. However, European Road Haulers Association general secretary Marco Digioia said he expects “many drivers will not return to the UK”.

According to the Office of National Statistics (ONS), inflation rose to 3.2% in August. It’s the highest figure since 2012. It means, for example, that the NHS workers 3% pay deal is effectively cancelled out. Rehana Azam, GMB national secretary, commented on how surging inflation:

is part of a perfect storm that includes the public sector pay freeze, the imminent cut to universal credit and the withdrawal of the furlough scheme, and the national insurance hike that will cost care workers £150 a year.

Commercial CO2 supplies are also at risk because of a massive rise – 250% since January – in wholesale gas prices. Two fertiliser plants in Cheshire and Teesside that produce CO2 as a by-product have closed because of this rise in gas prices. While the government is now subsidising one of the plants so that it can reopen, it’s only for three weeks.

If the CO2 crisis continues, that could affect supplies of many food and drink items. These include fizzy drinks, beer, and pre-packaged foods and meat products like frozen turkeys.

Meanwhile, The Canary pointed out that the solution to this crisis is simple: re-nationalisation. According to We Own It, “Public ownership of energy networks will save £3.7bn a year – enough to buy 222 new offshore wind turbines”.

According to the Living Wage Commission, income has stagnated over the last 30 years and is the “leading cause of income disparity in the current generation“.

Based on ONS figures, UK workers have experienced an average real terms pay cut of £1,000 per year since the Tories were voted into government. That equates to a cut of £11,000 per person in total. Meanwhile for healthcare workers, a recent House of Commons library report showed that any rise in their income will be offset by the April 2021 increase in National Insurance. According to the Guardian:

A nurse or midwife on an average salary will see their tax bill soar by £310, care home workers will have to pay at least £140 more and ambulance staff will be hit with a £420 increase.

With energy prices set to rocket – plus National Insurance hikes and the Universal Credit Cut on the way – the Tories are condemning millions to a winter of misery.#CancelTheCut

Indeed, the £20 a month cut in Universal Credit is anticipated to see more than 600,000 people pushed into poverty. According to a 2019 report by Labour, poverty is entrenched in the UK thanks to successive Tory governments .

Also, according to Action for Children (AfC), prior to the pandemic 31% of children in the UK were living in poverty. And the Joseph Rowntree Foundation calculated that price rises in energy and consumer goods and the additional NI payment will cost lower income households £710.

Road Haulage Association’s Rod McKenzie has accused the Johnson-led government of being nothing less than “government by inertia”.

And Andy Beckett commented in the Guardian how:

Boris Johnson has presided over more disruption than any prime minister for decades: in education, agriculture, construction, the courts, manufacturing, exports and imports, the hospitality industry, retail and, above all, public health policy. He has rarely been able to present himself as in control of events. And unlike the crises of the 1970s – which led to almost no loss of life – his premiership has seen tens of thousands of unnecessary deaths.

the hardest possible Brexit, and [Johnson’s] careless governing style have greatly contributed to the disorder.

Beckett asked: “So why has all the chaos not left his administration seriously damaged?” He offered a number of answers, including how the population may have got used to this chaos being the new norm. However, this analysis doesn’t fully take account of the dismal offerings by Labour leader Keir Starmer, who Beckett described as  “baffled”.

But forget Starmer. The real question is this: just how much hardship and chaos can working class people endure?

Is it when Christmas means no turkey or chicken or toys or your favourite beer? Or no Christmas at all? Or freezing homes because there’s not enough money to pay the lecky? Or far more people desperately turning to food banks to avoid starving?

And at what point does discontent turn to sheer, unadulterated anger?