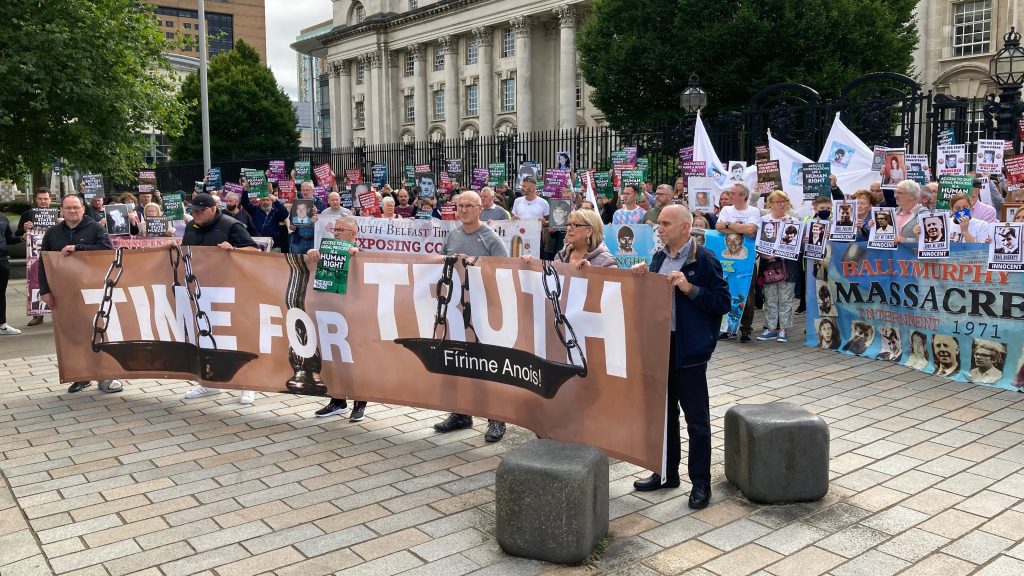 Victims’ campaigners have staged a series of demonstrations across Ireland. The demos are in protest at the UK government’s proposals for dealing with alleged criminality.

In July, Northern Ireland secretary Brandon Lewis announced plans for a statute of limitations which would end all prosecutions for Troubles incidents up to April 1998. And it would apply to military veterans as well as ex-paramilitaries. Prime minister Boris Johnson said the proposals would allow Northern Ireland to “draw a line under the Troubles”. But they would also end all legacy inquests and civil actions related to the conflict.

All the main political parties in Northern Ireland, as well as the Irish government and a range of victims and survivors’ groups, have heavily criticised the plan.

The Time for Truth campaign has criticised the strategy as a British attempt to “bury its war crimes in Ireland and protect war criminals”.

Time for Truth campaign spokesperson Ciaran MacAirt claimed they are “insidious and perfidious proposals which would have embarrassed Chile’s Pinochet dictatorship”. His grandmother Kathleen Irvine was one of 15 killed in the loyalist bombing of McGurk’s Bar in north Belfast in 1971. His grandfather John was badly injured in the atrocity.

Addressing the 25 September demonstration in Belfast, MacAirt said “before we buried our loved ones, the British state buried the truth”. He added:

We’re standing here shoulder to shoulder yet again because of a perfidious British government.

He claimed the government is “reneging” on past agreements in the latest proposals and highlighted the level of opposition to them:

Standing with the families of the Time For Truth campaign are people from across the island of Ireland, Britain, Europe and America, and it includes families, NGOs, academics, politicians and human-rights lawyers. This is a formidable coalition and we have a terrible fight ahead of us, but we will not allow anyone to ride roughshod over our human rights again.

We will have to fight them legally, academically, politically and morally. Our families’ message to Boris Johnson, Brandon Lewis and the British government is clear: all families have a right to truth and justice.

Justice for the Forgotten

The Time for Truth Campaign staged a national day of action across Ireland on 25 September. Margaret Urwin from the Justice for the Forgotten group addressed the Dublin demonstration. The group campaigns on behalf of families bereaved in the Dublin and Monaghan bombings in 1974.

Urwin criticised the proposals as a “sweeping and unconditional amnesty for all state and non state actors in the conflict”. And she said this is designed to end all current and future legacy prosecutions and inquests. She added:

We are convinced that a more duplicitous reason is to prevent the full truth about their dirty war from emerging, their colluding with loyalist paramilitaries from the very early days of the conflict