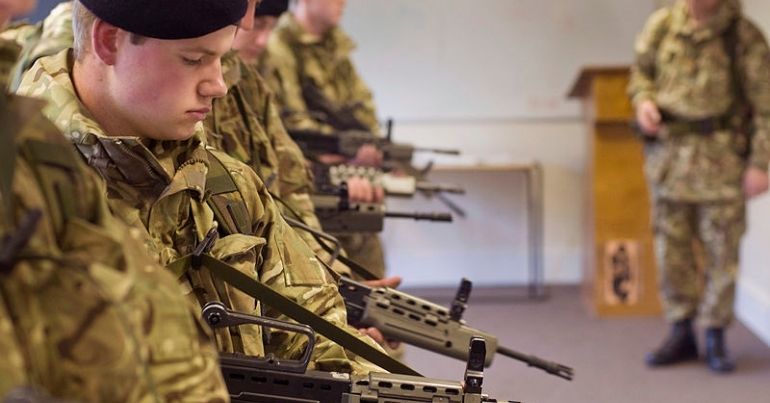 Recruits at the army’s training camp for 16-year-olds were punched by a corporal, a court has heard. Corporal Kimberley Hey, an avid boxer, is said to have hit one child recruit so hard that he cried. Hey has claimed the punches were “banter”.

It comes as the UK military is in the midst of several scandals. The top generals were forced to come together this week to discuss internal army culture. This followed allegations about a soldier murdering Kenyan woman Agnes Wanjiru and endemic sexual harassment against serving women personnel.

Hey was employed as DS (directing staff, a military instructor at the Harrogate Army Foundation College. All recruits are under 18, and some are as young as 16. The court heard claims that she told new arrivals “You’re mine now, b**ches”.

Training at Harrogate is divided into three terms. One of the soldiers who trained under Hey testified by video link. Signaller Hannah Harwood described her platoon’s early meeting with Hey:

Cpl Hey addressed the platoon at the beginning of the first term, when we first arrived.

We were all standing on the company lines in the corridor. She said something along the lines of, ‘You’re mine now, b**ches’.

‘She would punch us’

Harwood told the court that the abuses continued throughout the three terms. Hey would abuse recruits when in a bad mood:

If she was in a bad mood she would punch us. She did punch me on one occasion… just a quick jab to my stomach.

I didn’t have any warning but I had seen it happen to other people so I was expecting it, and she didn’t hit me as hard as she hit the males.

Harwood said that abuse continued into the third term, with one recruit crying as a result of the punches

There was one event that stuck out in the third term… Cpl Hey punched (another male trainee) and winded him to the point where he cried.

Wing commander Saunders, prosecuting, told the court that Hey had used the punches “as a form of punishment if they got an answer wrong on a test”:

She would call them to a line through the corridor, walk up and down the corridor and, on occasion, tell them to loosen their belt buckle before hitting them.

As well as the abuses listed above, alleged and otherwise, the military has long been wracked with scandals. Currently allegations of war crimes in Afghanistan are being heard. And it has been suggested political pressure stopped a full investigation:

The High Court is now hearing discussion as to whether "improper political pressure" led to Afghan war crime probes being shut/narrowed down. Judge questions whether this is in scope. Saifullah's team say it could have been "a form of cover up"

This comes only a week after a former soldier on trial for the 1974 shooting of a disabled man in Ireland died of coronavirus before the proceedings could conclude. The military then decided that the accused should be buried with full military honours.

And Hey isn’t the first Harrogate army foundation college instructor to have ended up in court. In 2018, 50 allegations of recruit abuse emerged. Recruits said they had been slapped, spat on and ordered to eat manure. These involved 16 military instructors. But the case collapsed with the judge criticising the military police for investigating allegations poorly.

A 2019 investigation showed that 122 military instructors had been disciplined for offences like recruit abuse, hazing and using drugs.

Suggestions that some form of representative body for personnel might improve conditions were attacked this week in the Lords. Former senior navy officer Lord Boyce inferred the idea was communist:

Would we have to have an Armed Forces federation member, rather like a Soviet commissar, on ships deployed for example in the Pacific? I think this is completely impractical.

The court martial of corporal Kimberley Hey continues. She denies the charges.