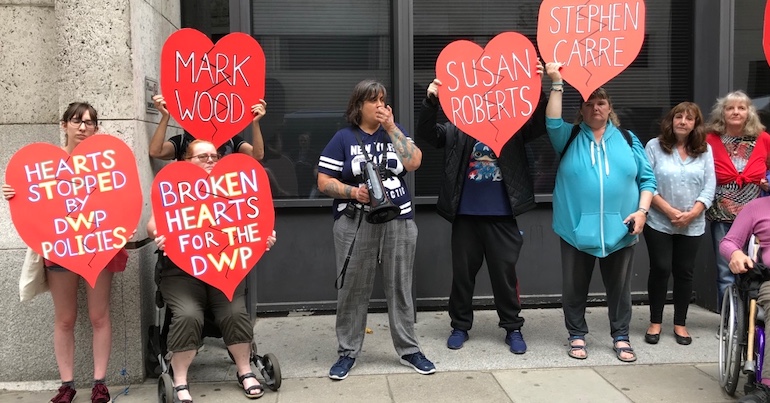 On 22 July, disability rights activists staged a peaceful protest outside the head office of the Department for Work and Pensions (DWP) in London. The action drew attention to the rising number of deaths as a result of DWP benefit cuts. Ahead of the protest, artist and activist Dolly Sen wrote to Boris Johnson and Jeremy Hunt to draw attention to this situation. Both failed to respond.

“Broken Hearts for the DWP”

Sen is an artist, writer, performer, and filmmaker who often focuses on disability issues in her work. Her letter asked the potential future prime ministers if they would maintain:

a hostile environment for disabled people and [continue] with DWP policies that have sent people to their early graves.

Neither Johnson nor Hunt replied. So Sen arranged the action outside DWP head office at Caxton House, Westminster, London called ‘Broken Hearts for the DWP’. She was joined by disability rights activists and family members who have lost loved ones due to DWP benefit cuts.

Those taking part held up large broken hearts with the names of people who have died. This was “to remember, in a personal and human way, people who have not survived the cuts”.

Whoever will be prime minister should start their first day by dipping their hands in blood just to get used to the feeling of being behind the current DWP policy.

“No money, no support, no hope and no food”

A press release stated that this “symbolic protest” was “to remember those who have not survived the cuts”. Everyone at the action carried “a large red heart with the name of a person who has died due to DWP cuts”. The action focussed on the names of four people who the campaigners say died as a direct result of DWP actions “even though there are thousands to choose from”. It continued:

the [DWP] helped those hearts to stop forever. These names cannot speak for themselves any more, we as fellow disabled people, are going to show we mourn these hearts stopping. The government is deeming people ‘fit to work’ despite being dying of cancer, unable to leave their beds, having heart attacks during assessments.

Disabled people feel like they are being treated in a similar way to how disabled people were treated in Nazi Germany. Not quite led into gas chambers, but put into lose-lose situations where they have no money, no support, no hope and no food in their fridge. They feel like the public doesn’t care because there is little outrage. Is it any wonder some end their lives because of it?

“I miss her so much”

The group named and described the people remembered in this action:

Jodey Whiting – a mother and 42 years old when she died. She was penalised for not attending a benefit assessment. Following this, her benefits stopped. She couldn’t attend the assessment because she was seriously ill in hospital.

Stephen Carre, 41, struggled with depression and anxiety to the point he never left his house. He ended his life after being found fit for work. His GP and psychiatrist were not asked to provide evidence. On his appeal form, he wrote that the assessment arranged by the DWP “bears no relation to the medical I had”.

Mark Wood, 44, was found fit for work against doctor’s advice. He had complex mental health needs. His benefits were stopped. He starved to death.

Susan Roberts, 68, took her own life two days after learning of her failed PIP appeal.

One of the participants was Joy Dove, Whiting’s mum. Dove said before the action:

I miss her so much, if I can help others, Jodey won’t have died in vain. I will be proud to hold her name up but I’m sad it came to this through the DWP’s failings.

In 2017, the UN described the situation in the UK as a “human catastrophe” due to “grave” and “systematic” violations of disabled people’s human rights under successive Conservative governments. As the group noted, the UN established that:

“A national tragedy and shame”

‘Broken Hearts for the DWP’ has three demands:

Sen told The Canary that if:

the DWP really cared about [Joy Dove] and people like her who have lost loved ones, they would overhaul the whole system immediately, otherwise, it is spin and empty words whatever they say. These hearts should still be beating and it is a national tragedy and shame they are not.

Caroline Cardus, one of the organisers, said:

Government rhetoric on the benefits system overhaul is a complete sham when some of the most vulnerable people are ending their lives in despair and starving to death. We believe the mental health crisis their methods are triggering will impact the UK for generations to come.

How many hearts will have to stop for a system that isn’t working before the government take notice?

Featured image via ‘Broken Hearts for the DWP’ used with permission