As we await a new prime minister, here's the perfect response - Canary 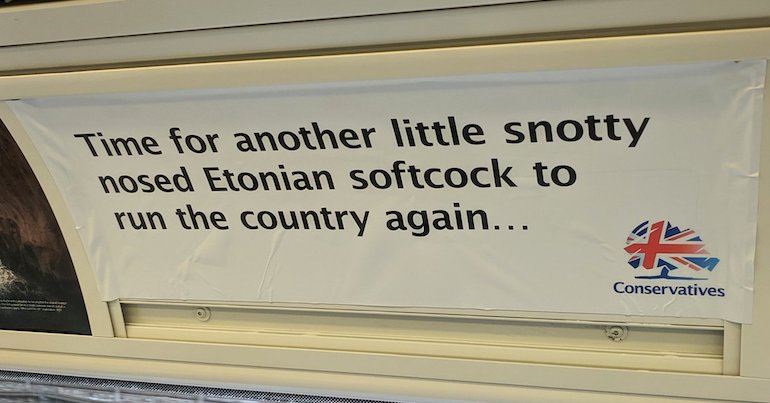 On 23 July, we’ll know the name of the UK’s next prime minister. It’s widely assumed Boris Johnson will win. But the second option – Jeremy Hunt – really isn’t much better. A street artist has created the perfect response, and it sums up the mood of many people.

Voting in the Conservative leadership contest closed on 22 July. The ‘winner’ will be announced at around 11am the following day. Ahead of this, subversive street artist Foka Wolf produced a series of posters that appeared on London Underground trains. The artist told The Canary:

Foka’s advertising agency has covered subjects including forehead extension and rent-a-curse, tackling both comedy and serious social and political commentary. But their most recognisable works are their joke adverts.

The posters displayed the Conservative Party logo. Some people thought they were real Conservative Party adverts. One in particular summed up the mood of the nation. The poster states that the UK’s next prime minister will be, “another little snotty nosed Etonian softcock”:

Last one of the set…
Had some great feedback. Thanks for the love guys! 💓#tory #toryparty @conservatives pic.twitter.com/lpFI6R2Y4U

Admittedly, only Johnson attended Eton, but Hunt was also privately educated at Charterhouse school. Both come from privileged backgrounds and went to Oxford. Covering allegations from racism to sexism and from lies to drug use, Johnson’s dubious history fills a sixteen-page document. Hunt, meanwhile, has an appalling track record, destroying the NHS and following this up with his continually alarming actions as foreign secretary. Yet, one of these men will soon be the UK’s (unelected) prime minister.

Foka Wolf also drew attention to the Conservatives’ appalling actions towards disabled people in the UK.

In 2017, the UN described the situation in the UK as a “human catastrophe” due to “grave” and “systematic” violations of disabled people’s human rights under successive Conservative governments. Since the Tories came to power, benefit cuts have been so severe that they’ve been directly linked to people’s deaths.

The 2017 Conservative manifesto promised, “to halve rough sleeping over the course of the parliament and eliminate it altogether by 2027”.

Yet rough sleeping has soared under consecutive Conservative-led governments, up 165% since 2010. In 2018, Crisis recorded a 20% rise in the numbers of people rough sleeping in London alone. This included “1,382 people sleeping rough for the first time, a rise of 28%”. As The Canary reported in April 2018, the number of homeless people dying on the streets or in temporary accommodation had more than doubled over the last five years.

So Foka Wolf played on the disparity between empty Conservative promises and reality in another poster:

As with the best satire and irony, these posters are funny because they nail a grim reality. Foka Wolf’s subvertising brilliance creates a moment of lightness in what are actually incredibly worrying times. But given Johnson probably will be our next PM, we need all the laughter we can get right now.