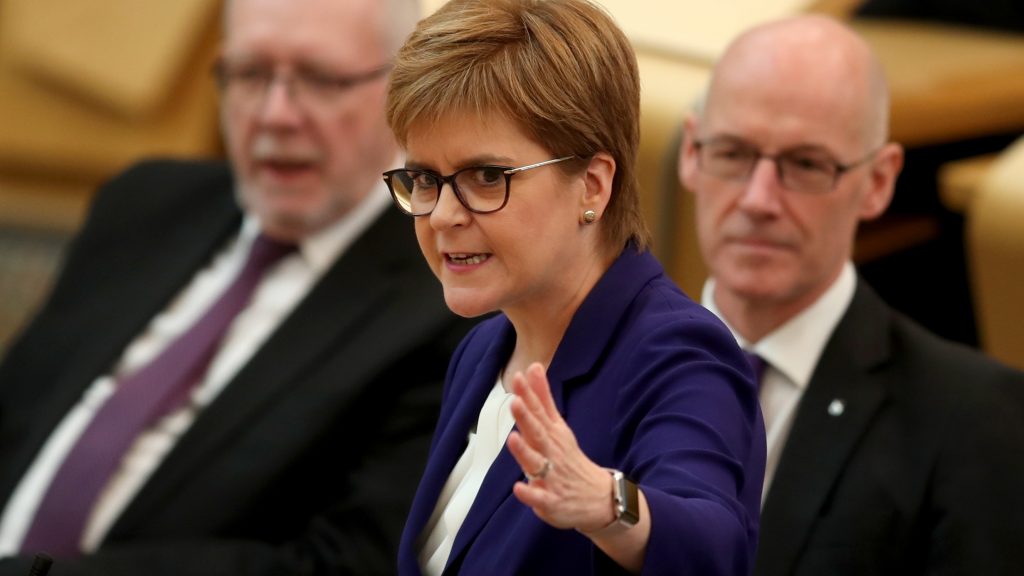 Nicola Sturgeon has said she will request UK Government consent for another referendum on Scottish independence before the end of the year.

Scotland’s first minister revealed she will ask Downing Street for a Section 30 order “over the next matter of weeks” as she presses ahead with plans to hold a vote in the latter half of 2020.

The Referendums (Scotland) Bill, which makes provision for such a vote, was produced by the Scottish Government in May.

I’m putting legislation through the Scottish Parliament right now, to put the rules and regulations in place. As that legislation progresses we will make that request for a Section 30 order.”

Asked if she will request the order this year, Sturgeon replied “yes”.

Asked if it will be this month, she said:

We will do it at an appropriate moment when the legislation is passing. It is likely to be over the next matter of weeks. It is coming soon.

Of course, we don’t yet know who is likely to be in Downing Street, the situation is very fluid.

As the SNP annual conference opened in Aberdeen on Sunday, Sturgeon reiterated her view that holding a legal referendum is the only route for Scotland to secure independence.

Some party activists want a “plan B” option for independence if the UK Government continues with its opposition to granting a Section 30 order, such as holding a Catalonian-style wildcat poll or taking winning a majority of seats at Westminster as a go-ahead for independence negotiations.

In an article in the Sunday Mail, Mrs Sturgeon wrote: “

I will not fall into the trap that our unionist opponents want me to, by deviating from our current path of ensuring the next independence referendum is legal and constitutional.

We don’t need to be talking about plan B when we have a perfectly good plan A – especially when any plan B is exactly the route many opponents of independence would like us to go down.

If we were to try to hold a referendum that wasn’t recognised as legal and legitimate – or to claim a mandate for independence without having demonstrated majority support for it – it would not carry the legal, political and diplomatic weight that is needed.