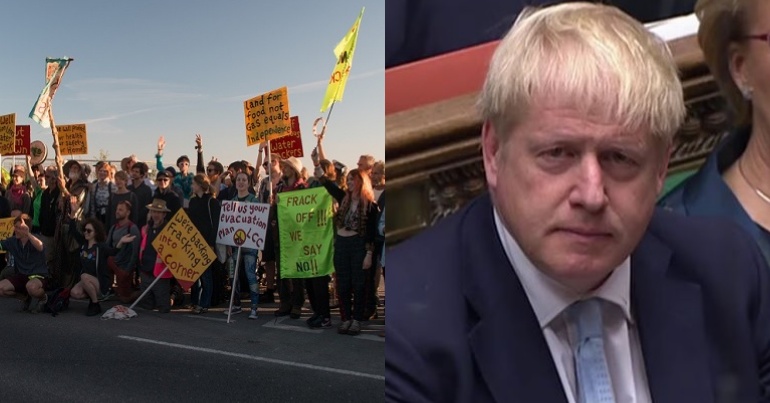 After reportedly triggering several earthquakes, Cuadrilla has begun removing its equipment from the only currently operational fracking site in Lancashire. Friends of the Earth campaigner Jamie Peters said:

Fracking in the UK is now dead. Cuadrilla’s test drilling at Preston New Road was the flagship scheme — and it’s gone badly.

To get this industry off the ground, regulations would need to be relaxed, and that’s just not going to happen after those August quakes and the growing environmental concerns around fossil fuels.

The shutdown is a blow for Johnson who has called fracking an “answer to the nation’s prayers”.

It looks like grassroots direct action and local organising has killed fracking.

The victory comes off the back of Lancashire’s seven-year-long anti-fracking movement. This has included “a fortnight of action disrupting companies across the UK supplying services and materials to the fracking industry” in June 2018. In response to direct action, the Conservative government oversaw a brutal crackdown on some of the protesters.

Three of Lancashire’s anti-fracking campaigners were jailed in September 2018 for allegedly causing a public nuisance. That’s despite the fact they were peacefully protesting against chemical shale gas extraction, which is strongly linked to earthquakes, polluted drinking water and only adds more to spiralling greenhouse gas emissions. Police and private security firms also stood accused of “unprecedented use of force”.

I want to see a green industrial revolution in Britain.

I want to see sustainability. We cannot go on with this level of CO2 emissions and global warming, otherwise we are all damaged if not doomed.

We have a short window, as a people, to reduce CO2 emissions, to prevent global warming beyond 1.5C, in order to protect the planet.

I want to say well done everyone in Lancashire that opposed fracking here, as in Derbyshire and other places, in Sussex, and the way in which you have made sure the issue is kept alive.

It looks like a radical solution to the oncoming climate catastrophe is on the cards. At the September 2019 Labour conference, the party voted to adopt a Green New Deal that would incorporate:

public ownership of the Big Six;

The death of fracking is a cause for celebration, and the protesters in Lancashire are our heroines and heroes. And Cuadrilla packing away its drills represents another blow for the Johnson government.