BREAKING: Our country just jailed these men for over a year for a peaceful protest - Canary 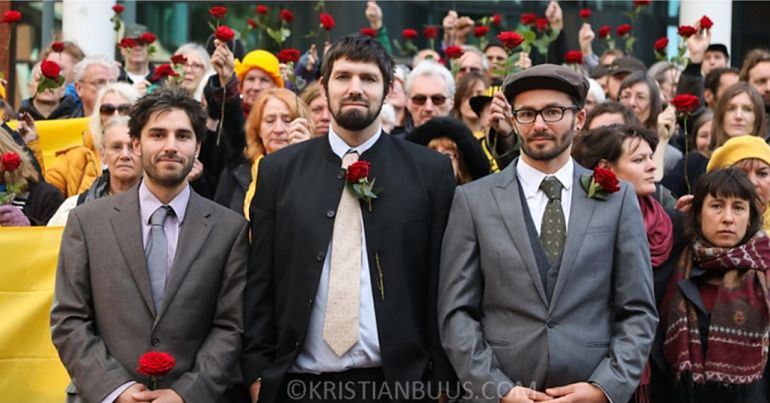 On 26 September, three people – including a teacher and a soil scientist – became the first anti-fracking protesters sent to jail. Two were sentenced to 16 months, one to 15 months, and a fourth person received a suspended sentence of 12 months.

The four were convicted of causing a public nuisance following a trial in August. As part of the protests at the Preston New Road fracking site, they climbed on top of lorries delivering equipment to the site and stayed there for four days.

The prosecution argued that the protest cost the fracking firm Cuadrilla £50,000 and the police £12,000. But the protesters’ barrister Kirsty Brimelow pointed out it was a peaceful protest. Brimelow further stated that freedom of speech was not just “simply standing and shouting”.

Co-ordinator of the Network for Police Monitoring (Netpol) Kevin Blowe told The Canary:

We have a long history of civil disobedience on conscientious grounds that has successfully challenged historical injustices and that was subsequently vindicated. In Lancashire, the government’s decision to overrule local democratic decision-making has left direct action against fracking as one of the few options left.

These are non-violent campaigners, motivated by sincere beliefs. There is no reason to send them to already overcrowded prisons when the courts regularly suspend sentences based on “good character” for convictions up to and including causing death by dangerous driving.

It appears the sentences imposed on the Frack Free Four are intended to serve as a warning to other opponents of fracking that the criminal justice system intends to crack down hard on direct action. This looks less like justice and more like retribution.

One of the men sentenced, Richard Loizou, is a teacher from Devon. A mother of two of his pupils was at court to support him. According to a press release seen by The Canary, she said:

Richard has taught my son for the last two years and is an inspirational mentor and beautiful soul. We are shocked and deeply upset by what is happening here, and felt compelled to come and offer our support today.

Loizou was sentenced to 15 months in jail.

This won’t break us, we will come out stronger. Some may view us as victims, but we refuse to be victimised by this. The real victims will be future generations suffering preventable disasters caused by climate change. Our friends and fellow campaigners outside will continue to fight for a ban on fracking and for a just transition to a renewable and democratically owned energy system.

But those who oppose fracking know that it is fracking itself, not protest, that is the public nuisance. The judge and the police might like to believe a deterrent sentence will send shock waves and put people off protesting. But it won’t. It will heighten resistance. People are not staying on top of trucks for four days because it’s a ‘bit of fun’ but because the environmental impacts of not acting are too great.

This year, we celebrated the suffragettes. There is a long and proud history of direct action in this country and these sentences – while shocking, shameful and abhorrent – will do nothing to change that.