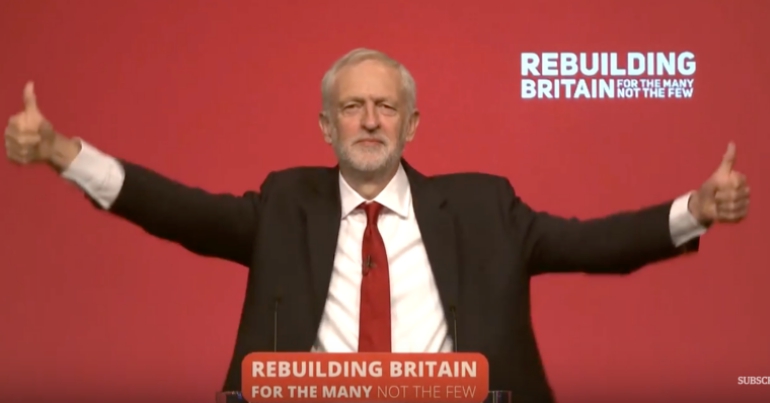 Jeremy Corbyn only needed one sentence to nail the mainstream media at the party’s conference:

It turns out that the billionaires, who apparently own the bulk of the British press, don’t like us one little bit.

"It turns out that the billionaires, who apparently own the bulk of the British press, don't like us one little bit" – Jeremy #Corbyn criticises the #BrokenMedia at #Lab18 conferencepic.twitter.com/Zz2pVkXYqU

Corbyn also set out why this might be the case, including Labour’s commitment to clamping down on tax dodging and:

because we don’t fawn over them at white tie dinners and cocktail parties.

As journalist Owen Jones pointed out, it made for awkward scenes:

I’m sitting with the press pack as Corbyn speaks about a billionaire owned press which attacks the powerless, not the powerful, and the mood is rrrrrrrather awkward #lab18 pic.twitter.com/tHfdFigIZo

But while some mainstream media journalists did appear to find it awkward, Corbyn’s speech made it clear that:

We must, and we will, protect the freedom of the press to challenge unaccountable power.

Journalists from Turkey to Myanmar and Colombia are being imprisoned, harassed or sometimes killed by authoritarian governments and powerful corporate interests just for doing their job.

And he made the distinction between a free press and a press free to print lies and distortions:

But here, a free press has far too often meant the freedom to spread lies and half-truths, and to smear the powerless, not take on the powerful.

But he didn’t just nail the media

Corbyn used his speech to set out his vision for the future; from NHS funding to renationalising public services; childcare to housing and renewable energy. He also tackled the antisemitism allegations the party has faced head-on with a message to Jewish people:

This party, this movement, will always be implacable campaigners against antisemitism and racism in all its forms.

We are your ally…

We will work with Jewish communities to eradicate antisemitism, both from our party and wider society. And with your help, I will fight for that with every breath I possess.

And he challenged Theresa May and her party over its hypocrisy:

So conference, we won’t accept it when we’re attacked by Tory hypocrites who accuse us of antisemitism one day, then endorse Viktor Orbán’s hard-right government the next. Or when they say we are racist, while they work to create a hostile environment for all migrant communities.

Be afraid, be very afraid

Many people were impressed with Corbyn’s speech:

An v good speech from #Corbyn — focused on the everyday struggles & concerns of the majority, embracing hope over fear, brave on foreign policy & serious about climate change. His enemies should worry. They’ll need to do better than lazy smears & Czech spies to beat him. #Lab18

That for me was the best speech I've heard from #Corbyn, his attack on tax cuts for the rich ahead of care for the disabled, which kick started the Hostile Environment around welfare showed both his compassion for the disabled and rage at tory cruelty, he was magnificent #lab18

But it wasn’t just his core supporters who were impressed:

Spot on. I'm a centrist, neither con or lab, and I'd say #Corbyn has hit the mark – it's a good speech. Based on hope not fear. #Tories should be worried. #Lab18 https://t.co/zt08fBqqNf

And as the Conservatives count down the days to their conference, this was the general mood:

This speech was Corbyn at his best: on the offensive and setting out the real difference that a Labour government can and will make to people’s lives. The Conservative Party should be afraid. Because things are changing. And people want change.