After the UN greets Trump with laughter, Twitter users pile on the ridicule - The Canary 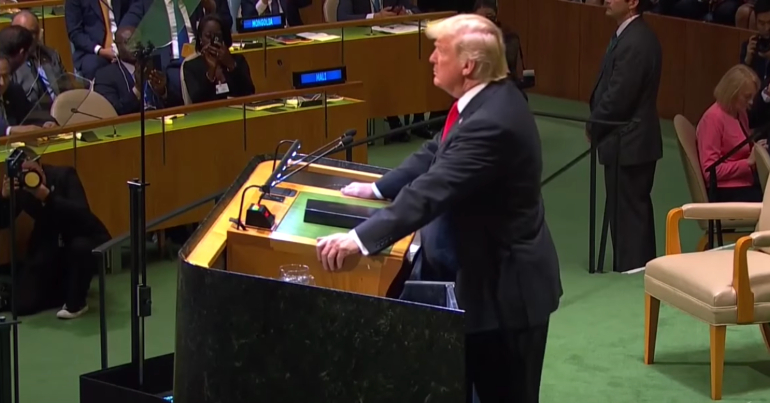 On 25 September, US President Donald Trump gave a speech at the annual gathering of the UN General Assembly. Whereas during last year’s meeting he laid out his ‘America First’ vision, this year he decided to use his speech as an opportunity to brag about his administration’s ‘achievements’. But almost as soon as he began his boasting, his preposterous claims were met with open laughter by the audience. And Twitter has since erupted in mockery.

About 120 world leaders gathered at the UN headquarters in New York City for the event. And just two sentences into Trump’s speech, many of them started laughing at the absurdity of its content. He said:

Today I stand before the United Nations General Assembly to share the extraordinary progress we have made. In less than two years my administration has accomplished more than almost any administration in the history of our country. America’s…

The third sentence was cut off as the room began to erupt in open laughter. Trump appeared stunned by the reaction and snapped back, saying “so true”. After seemingly regaining his composure, he said: “Didn’t expect that reaction but that’s okay”.

Social media users were quick to pile on the ridicule, especially given that Trump had previously tweeted:

We need a President who isn't a laughing stock to the entire World. We need a truly great leader, a genius at strategy and winning. Respect!

There was appreciation for the ‘reality check’:

To the nations of the world: thank you for your laughter at the UN. It was a reality check for Trump (who is now lying and claiming he intended to make you laugh).

There was surprise that more people don’t laugh him off the stage:

Historian @jricole on Trump's U.N. address: "What's amazing is not that this hall of seasoned professionals laughed at him, but that he doesn't get more laughter, and in the United States, these news programs take him seriously, and he should be laughed off the screen everywhere" pic.twitter.com/Tw9QzTEFfr

And, of course, there was denial in pro-Trump quarters:

On @foxandfriends, @nikkihaley attacks media for…..[checks notes] …. Trump getting laughed at at UN.

"I saw the media was trying to make it something disrespectful. That's not what it was. They love to be with him. That's only time you'll see that chamber standing room only" pic.twitter.com/LrxZzbMY0R

Bowing before Putin in Helsinki and getting laughed at by world leaders at the UN make for bookends of Trump's foreign policy to date.

Once the laughter died down, Trump continued to boast about dubious accomplishments. He said that the US economy is “booming like never before”.  He added:

Since my election, we’ve added $10 trillion in wealth. The stock market is at an all-time high in history, and jobless claims are at a 50-year low.

But these claims are highly questionable. Fact-checkers have already debunked several of them. Unemployment, for instance, is not at an all-time low, and nor is GDP at an all-time high.

Other claims made in his speech were accurate but hardly worth bragging about. He spoke, for instance, about the beginning of construction for the US-Mexico border wall and the trade war with China. He also pointed out that his government has secured $700bn in funding for the US military from Congress for this year and another $716bn for next year.

And, of course, he could not resist the temptation to defiantly chide the UN by expressing his contempt for international organizations and preference for nationalism. In addition to defending the US withdrawal from the UN Human Rights Council, which he described as “a grave embarrassment to this institution”, he said:

America will always choose independence and cooperation over global governance, control, and domination.

This latest performance represents a new low in Trump’s inept interaction with the international community. Though it will probably not prove to be the last nail in the coffin of his presidency, it has certainly dealt another fatal blow to any last vestige of its credibility.