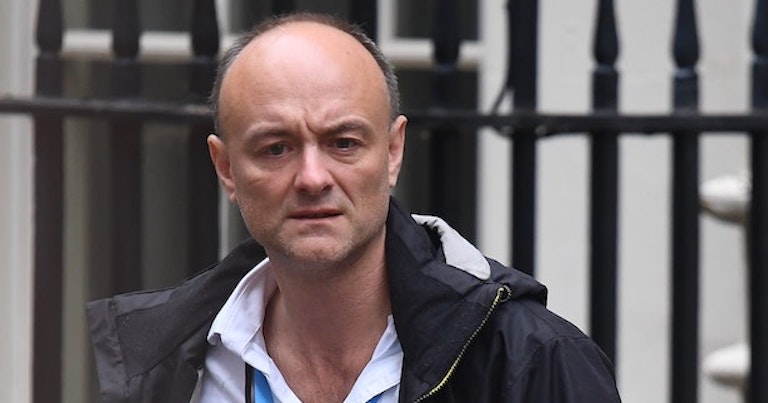 Dominic Cummings’ days as senior adviser to Boris Johnson are numbered, according to a former member of Tony Blair’s cabinet.

Alan Johnson said the public perceived the Vote Leave mastermind as the “puppet master” and that meant he would have to leave Downing Street as there can only be one leader in No 10 – the prime minister.

I think his days are numbered precisely because the public perceive him as the puppet master. That’s bad for Government and that’s bad for Boris Johnson.

No one else who has come in as a special adviser who has been played by Benedict Cumberbatch on the telly, so that kind of goes to your head.

But no one else has come in as a special adviser to the Prime Minister who has been such an abject failure in his previous department.

The reason Michael Gove was moved from Education by David Cameron was because he was at war with everyone in the education world.

And why was he at war with everyone in the education world? It had a little bit to do with his special adviser and that was Dominic Cummings.

He’s on his way out.

Johnson added: “Boris Johnson likes to be the star and as a long-term thing if you are Prime Minister you really don’t want anyone else being the most powerful person.”

The former postman, who served in Tony Blair and Gordon Brown’s Cabinets, was speaking at an event at the Cheltenham Literature Festival alongside Theresa May’s former director of communications Katie Perrior to discuss the role of special advisers in Government.

Perrior said some of the briefing of journalists coming out of Government by “unnamed sources” was being attributed to Cummings. She asked:

Now we have created a monster, as it were, inside No 10 whether we like it or not who the media will go to if they are not getting anything out of the prime minister.

We have another avenue and I think that can be quite dangerous.

Johnson and Perrior said that the “aggression” exhibited by some previous special advisers who served both the Labour and the Conservative governments was not the best way to operate.

Perrior famously quit Downing Street shortly before the 2017 general election and blamed a toxic atmosphere inside No 10 on Theresa May’s two joint chiefs of staff Fiona Hill and Nick Timothy.

“Deep down looking back it was the prime minister’s fault because she allowed that to happen and didn’t take control of the situation and when they went she just tried to find it in someone else,” she said.