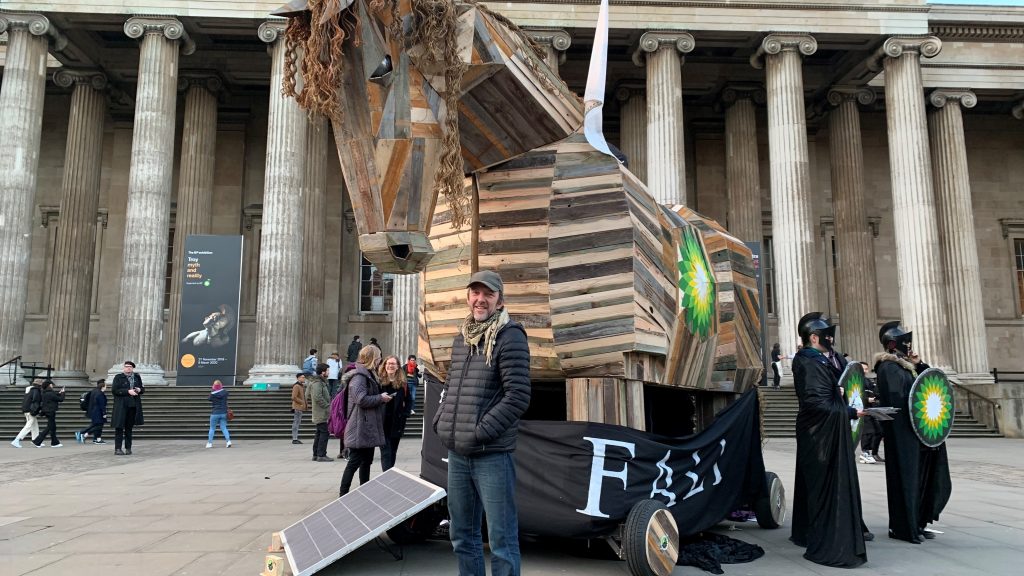 Protests at the British Museum have ended after more than 50 hours amid a row over oil company BP’s sponsorship of a Troy exhibition.

Climate activists BP Or Not BP? occupied the Great Court inside the museum on Saturday night, where they covered themselves in plaster as part of a “theatrical protest”.

Around 60 people took part in the action, in which they created a structure out of their body parts for a piece called Monument.

Activists left at about 10.30am on 9 February. The action started at 7.30am on 7 February when a 13ft-high Trojan horse was wheeled into the grounds of the museum in response to the sponsorship deal.

Two activists, Phil Ball and Chad Nickson, stayed in the timber structure overnight after “a friendly negotiation” with British Museum staff, according to the group.

They later removed it from the site after a 35-hour stint in the grounds.

The group said more than 1,500 people had taken part in the peaceful protest, in which the pressure group held talks and singing activities inside some of its exhibition rooms.

Crowds of supporters could be heard cheering and clapping as the activists delivered speeches about the climate crisis.

They also staged a “sit-in” inside the Great Hall for 15 minutes, singing and chanting “BP must fall”.

Member for BP Or Not BP? Malou den Dekker, 24, told PA news agency: “The issue of sponsorship is dear to my heart because the way that fossil fuel companies are allowed to make themselves look good in our cultural spaces is really outrageous during our time of climate crisis.

“The British Museum should be taking a far harsher stand on partnering with people who are complicit in the climate crisis and until they draw that line, we will be coming back with performative actions.”

Museum director Hartwig Fischer said: “The museum is a public space where people can come to debate and we respect other people’s right to express their views.

“We share the concerns for the challenges that we all face together as a result of climate change.

“We address these issues in an innovative way through significant exhibitions and public programming.”

He added: “The British Museum offers for millions of people an extraordinary opportunity to engage with the cultures and histories of humankind.

“Without external support and sponsorship, this would not be possible.

“Removing this opportunity from the public is not a contribution to solving the climate crisis.”

A spokesman for BP said: “Our new CEO, Bernard Looney, will set out his low-carbon ambition for BP next week.

“He understands the frustration and anger and shares protesters’ deep concern about climate change.

“He hopes that what he has to say then will give people a sense that we get it and are very serious about working to address the problem.”