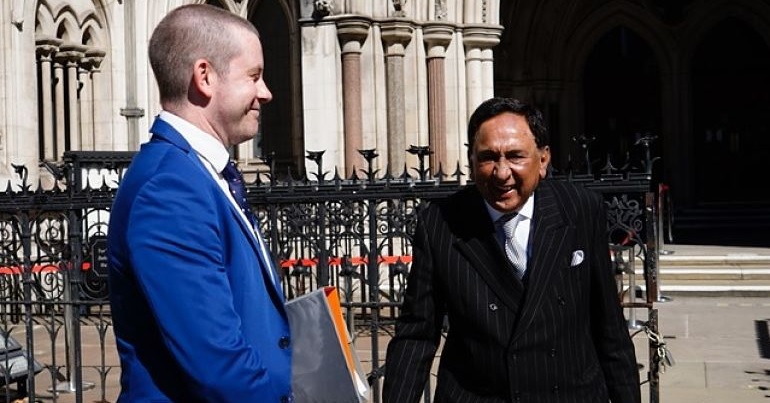 The publisher of the MailOnline has apologised in court over completely ‘untrue’ allegations the outlet made against a Muslim Tory peer. Mohamed Sheikh has also accepted “substantial” damages from the publisher over the “shocking and unfounded allegations” the Mail made about him.

In August 2018, the Daily Mail ran a story about Jeremy Corbyn attending a 2014 conference on Palestinian rights in Tunisia. The outlet claimed he’d participated in a wreath-laying ceremony “near the graves” of “Palestinian leaders believed to be connected to… [a] terror attack on Israelis at the 1972 Olympics”. At the time, Corbyn explained:

Sheikh attended the conference as well. In an article, the Mail asserted that he’d gone to “Corbyn’s hate conference” after “years of rubbing shoulders with Islamists, hate preachers and Holocaust deniers”. The Conservative peer, who started the Conservative Muslim Forum, faced calls for his expulsion from within his own party over his attendance. Sheikh branded the attacks on him from his party as “politically motivated”, saying they were a result of his criticism of Boris Johnson’s Islamophobic remarks.

The Conservative peer sued Associated Newspapers Limited (ANL) for libel over the article. Callum Galbraith, Sheikh’s solicitor, told the High Court on 30 July that Sheikh found the article – which featured “the notorious image of ‘Jihadi John’ wearing a balaclava, pointing a knife towards the camera” – “deeply distressing”.

The defendant through me offers its sincere apologies to the claimant for the distress, embarrassment and upset caused to him by the publication of the article.

The defendant accepts there was and is no truth in the allegations advanced in the article and is happy to set the record straight and apologise to the claimant.

In a statement, Sheikh said:

Both before and since I entered the House of Lords, I have consistently sought to promote inter-racial and inter-faith understanding, tolerance and respect.

I am delighted to have been able to finally clear my name from these shocking and unfounded allegations.

Galbraith also said that the publisher has “agreed to pay a substantial sum of damages to the claimant and his legal costs”.

“A war waged on children”

During the proceedings, the High Court heard that the conference on Palestinian rights was “held a short time after hostilities between Israel and Gaza had resulted in over 2,000 deaths”.

A 2015 report by the UN Office for the Co-ordination of Humanitarian Affairs (OCHA) found that Israel had killed more Palestinians in 2014 than in any other year since 1967. A Israeli assault on Gaza, known as Operation Protective Edge, claimed most of those Palestinian lives. Israel caused the death of 2,314 Palestinians that year; 2,220 of them were Gazans. In its report, titled Operation Protective Edge: A War Waged on Gaza’s Children, Defense for Children International said:

For children living in the Gaza Strip, 2014 was a year that brought violence, fear, and loss. The Israeli military offensive that lasted 50 days between July 8 and August 26, dubbed Operation Protective Edge, killed 547 Palestinian children, 535 of them as a direct result of Israeli attacks. Another 3,374 children suffered injuries in attacks, including over 1,000 children whose wounds rendered them permanently disabled.

Featured image via Carl Arrindell and additional reporting from PA