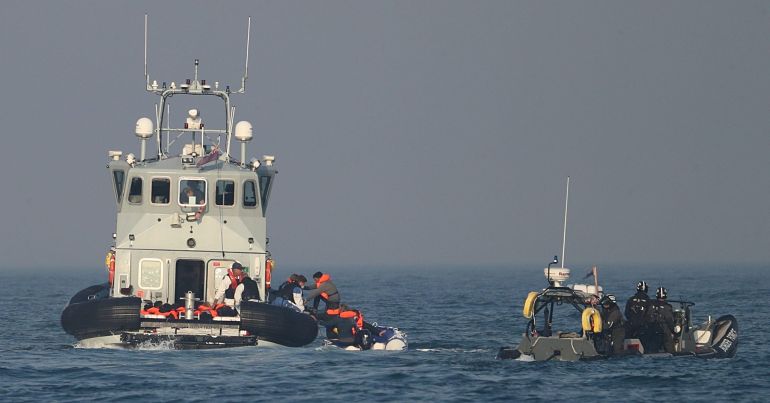 Over 4,000 people, including women and children, have made the crossing from Calais to Dover in 2020. This is less than 1% of the total number of people who came to live in the UK in 2019. Most of them travel on small and overcrowded dinghies. And the Channel is one of the busiest shipping lanes in the world. According to the BBC, they come from the “poorest and most chaotic parts of the world”, and many seek asylum once they arrive.

Efforts to stop people making the journey intensified in the early hours of Monday 10 August. A Border Force patrol boat off the coast of Dover in Kent intercepted an inflatable dinghy thought to be carrying more than 20 Syrians.

Home secretary Priti Patel was also spotted in Dover, disembarking from a police boat that had been out in the Channel. At the same time, the Royal Air Force (RAF) dispatched a plane authorised by defence secretary Ben Wallace to survey the Channel.

The government has faced growing criticism and accusations of being “increasingly chaotic” in its handling of the crisis. Speaking during a trip to St Joseph’s school in Upminster, Johnson said: “There’s no doubt that it would be helpful if we could work with our French friends to stop them getting over the Channel. Be in no doubt what’s going on is the activity of cruel and criminal gangs who are risking the lives of these people taking them across the Channel, a pretty dangerous stretch of water in potentially unseaworthy vessels.

“We want to stop that, working with the French, make sure that they understand that this isn’t a good idea, this is a very bad and stupid and dangerous and criminal thing to do.

But then there’s a second thing we’ve got to do and that is to look at the legal framework that we have that means that when people do get here, it is very, very difficult to then send them away again even though blatantly they’ve come here illegally.”

The prime minister’s response seems not to take into account that the government’s own advice is that people should apply for asylum once they “arrive in the UK”.

“It won’t change anything”

a political measure to show some kind of resource to fight against smugglers and illegal crossings in the Channel, but technically speaking that won’t change anything.

Asked if it might be a deterrent, he added: “Yes, but that’s dangerous, because if there is a vessel from the Royal Navy trying to push a vessel, very small boat full with migrants, back into French waters – first you could say that you’ve got British vessels entering French waters, I don’t know if the British Government would be very happy to see the other way, if French vessels would enter without any ask, before or without any decision before, into British waters.” He said French authorities were already trying to do “whatever we can” to intercept crossings.

Last year, Priti Patel vowed the crossings would become an “infrequent phenomenon” by now. But instead, the number of people arriving is reaching record levels. And while the prime minister and the home secretary seem to wish to appear tough on the crisis, their response so far has not met with much approval.

The Home Office has now appointed a former Royal Marine to head up an operation to tackle the situation and formally requested help from the Royal Navy for help – a move branded a “completely potty” idea by a Ministry of Defence (MoD) source. Meanwhile The RAF carried out aerial surveillance using an Atlas plane as part of an “initial offer of assistance” from the MoD to the Home Office. But the purpose of the flight is so far unclear.

It is also unclear if the prime minister’s potential law changes will do anything to safeguard the rights of people seeking asylum in the UK. Or if he will heed the advice of the many refugee action charities in the UK. Back in April 2020, chief executive of charity Refugee Action Stephen Hale said:

It’s heartbreaking that people including young children are having to risk their lives to seek refuge in the UK due to a lack of safe and legal routes to get here.
The government must stop talking tough and start thinking smart.

More routes for people to claim protection in the UK must be created, including a long-term commitment to resettle 10,000 refugees every year.

As the charity explains, action to help people seeking help – rather than using an armed forces response or branding them “stupid” or “criminal” – might stand a better chance of preventing “people attempting to cross the channel from risking their life, or putting it into the hands of smugglers”.