The Independent SAGE group has published an “emergency six-week plan for England in response to rising cases, hospitalisations and deaths”. It comes after it put forward a “ten point plan” in September – the guidance of which it says the government ignored.

In its introduction, Independent SAGE wrote:

We wrote on 21st September that we were in a crisis and put forward a ten point plan to avoid a new national lockdown in England. The points were not implemented and the crisis has worsened considerably.

Commenting on the current crisis, it said:

Daily confirmed cases are now almost 20,000 a day – four times what they were on 21st September. Hospital admissions and deaths are three times as high. Test results are taking longer, fewer new cases and contacts are being reached and those that are, are reached later.

[Government] SAGE noted that Test and Trace was now providing at best marginal impact on reducing transmission… Cases have continued to rise despite [restrictions in place since September] and although cases are highest in the North of England, they are rising rapidly across the country. We do not believe the current tiered system is sufficient to reverse the growth of the pandemic.

On 21st September, SAGE scientists recommended a two week “circuit breaker” where we return to a similar level of restrictions as in late May, followed by a period of continued restrictions sufficient to keep the “reproduction ratio” R below 1 while allowing schools to stay open. A new study, whose authors include members of the SAGE modelling subgroup, estimated that a circuit breaker could save thousands of lives and “reset the clock” to buy us time.

We agree. However, the time bought by a circuit breaker and continuing restrictions must be used to prepare for how we can re-open the economy safely, learning the lessons from this summer and autumn.

The published plan can be found online and is divided into three main parts. It would see: 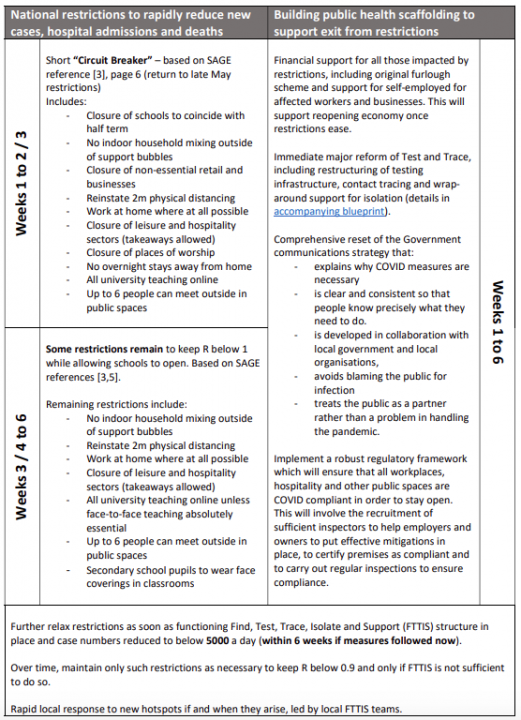