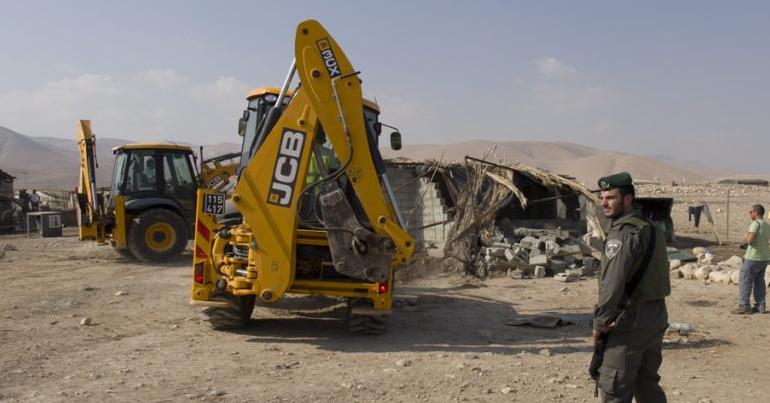 Campaigners are calling on the National Society for the Prevention of Cruelty to Children (NSPCC) to stop accepting donations from UK company JCB.

Shoal Collective also found that during 2018 JCB machines were used in the demolitions of two Palestinian schools, and that at least 31 children were made homeless as a result of demolitions involving JCB equipment.

JCB is facing an investigation over its conduct by the UK National Contact Point, and has been listed on a UN database of companies involved in the construction of settlements. JCB, and the Bamford family who own the company, are major donors to both Boris Johnson and the Tory party.

The UK branch of the Israeli Committee against House Demolitions (ICAHD UK) and Protecting Palestinian Families are calling on the NSPCC to stop accepting donations from JCB. Their campaign press release states:

ICAHD UK is supporting a campaign initiative taken by Protecting Palestinian Families, an offshoot of Stop the Demolitions, to stop the National Society for the Prevention of Cruelty to Cruelty to Children (NSPCC) from taking money from JCB, the British company that manufacturers industrial and agricultural machinery.

…[we] argue that the charity’s proclaimed values are rooted in the UN Convention on the Rights of the Child. Such values are universal, not selective, and apply to all children, not just to British children: Palestinian children matter too

A press release from the Social Work Action Network and the UK Palestine Mental Health Network stated the organisation’s concerns over JCB’s relationship with the NSPCC:

NSPCC is a leading British charity for children. It says that “Every Childhood is Worth Fighting For” and claims that it gives a voice to children when no one is listening. BUT NSPCC has accepted £5 million from JCB, knowing full well that JCB exports its equipment to Israel where it is used to inflict trauma and homelessness on Palestinian children.

NSPCC has received detailed evidence of how JCB’s equipment is used in violation of international law and human rights – but the charity, so far, has chosen to risk its reputation by standing by its wealthy donor.

The Canary contacted NSPCC for a response. A spokesperson for the charity said:

In line with Charity Commission guidance the NSPCC has produced ethical corporate fundraising guidelines reflecting its values which it always follows when undertaking due diligence on corporate partners.

JCB employees, their family and friends play an important role in supporting our local work in Staffordshire. They have raised money for our therapeutic services in Stoke on Trent, which has helped many children rebuild their lives after sexual abuse.”

But it’s clear that very sizeable donations have been made directly from JCB and the Bamford family, not only from JCB’s “employees, their family and friends”. For example, JCB’s chairman lord Anthony Bamford reportedly donated £1m toward the establishment of the therapeutic service mentioned above. This is named after his wife, and JCB director, Carole Bamford. JCB is listed as one of the NSPCC’s corporate partners.

Campaigners have been sending letters and postcards to the NSPCC demanding the charity severs links from JCB. They say that the reponses from the NSPCC have been ‘a smokescreen’. According to the Protecting Palestinian families press release

The charity fends off criticisms by arguing that it has “ethical guidelines” which reflect its values, claiming that the charity operates “in line with Charity Commission guidance.” The NSPCC says it will not scrutinise the “export activities of a corporate (sic) …unless the UK Government/ Department of Trade has formally imposed trade restrictions.”

However, this is a smokescreen. A Charity Commission document, “Know your Donors” advises charities to consider how bad publicity related to a donor could adversely affect the charity’s reputation. The Institute of Fundraising also gives guidance on how charities can consider the reputational risk from donors whose values conflict with those of the charity.

It is crystal clear that the NSPCC has the right to drop JCB on ethical grounds but is choosing JCB money above morality.

“When they demolished our house, I felt naked”

The UK campaigners invite the NSPCC to try explaining its reluctance to drop its wealthy donor to a Palestinian teenager who lost her home:

Perhaps the NSPCC and JCB should try explaining their policies to one of the Palestinian children whose home Israel has demolished, like 14-year-old girl, Asma, who said “… when they demolished our house, I felt naked… I was going crazy… I became a refugee on the rubbles of my home.”