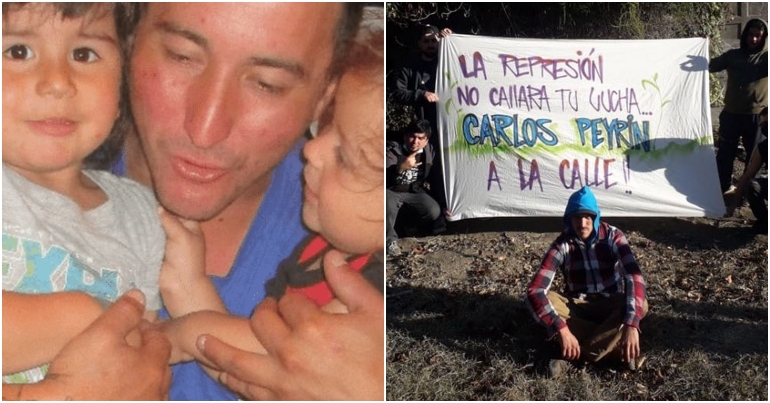 Peyrin was one of the thousands detained while attending anti-neoliberal protests in Chile in 2019. The protests began when students jumped turnstiles at the Santiago underground in protest at fare hikes which to led to mass anti-neoliberal demonstrations across the nation.

Peyrin was arrested on 3 December 2019 by the PDI (civilian police) and transferred to a detention centre. CSN described what happened:

He was transferred to a Detention Centre where he was interrogated for information on the people he was with at the time of the alleged crime. After seven days in detention he was finally able to have contact with his family and was transferred to Prison CCP Biobío ‘El Manzano’, without clean clothes and without access to toiletries or food.  Only after one month did he manage to get hold of some essential items. Carlos was kept naked, without food and sleep for various days in a dark room, only having the light on when he was interrogated. The police forcibly took photos of him dressed with a balaclava and these were sent to the TV channels in order to intimidate those on the Primera Linea (front line of demonstrations) and make them think that he was giving information.

Catherine McAndrew, spokesperson for SACHR at the University of Sheffield, stated:

We were inspired by the Chilean people’s uprising last year and appalled at the government’s repressive response. The terroristic actions of the authorities reminded us of 1973. We want to do what we can to help the people of Chile resist this tyranny.

When we heard of Carlos’ situation we were horrified. We demand that Carlos immediately be given the Sunday leave he is entitled to, that he be released without charge, and those responsible for his torture are held accountable. We will put pressure on authorities in Chile and the UK to secure his release.

We are at war against a powerful enemy, who is willing to use violence without any limits

The protesters encompassed various grassroots movements – including feminists, environmentalists, indigenous rights groups, and students – and were met with some of the worst repression since the Pinochet dictatorship.

the sponsor a Political Prisoner project is the culmination of work by the Chilean exile community and ordinary British people who are appalled to hear what is happening in Chile and are moved to help. Once again international solidarity is needed to support the people of Chile in their resistance against a tyrannical state.

There are presently around 2,500 political prisoners languishing in Chile’s prison, many of them minors.