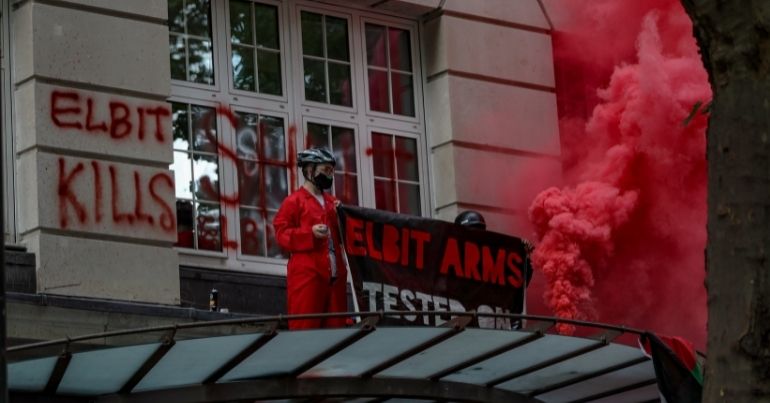 Activists from Palestine Action (PA) have occupied the London HQ of Israel arms firm Elbit Systems. Arriving on the morning of 6 August, the group quickly blocked the entrance to the firm’s offices. They also sprayed red paint around the site to symbolise the oppression of Palestinians by Israel.

PA was founded one year ago this week. In its press release, PA said that 105 days of that year had been spent occupying Elbit Systems sites or locations where Elbit components were made.

The police cordon off the street and #PalestineAction cordon off Israel's arms trade. They're protecting Israel's weapons and we're protecting humanity. We're on top and we will win! #ShutElbitDown pic.twitter.com/IqHDELdzuX

The group tweeted a video of members on a rooftop above the building entrance.

Elbit is Israel’s largest arms firms. Large parts of its infrastructure is based in the UK. In its press release, PA said:

The action taken today, as with all actions by Palestine Action, has been taken in order to end the supply of UK made arms, drones, munitions and military technology to Israel.

This tech, manufactured at Elbit’s 10 sites across the UK, is sold to Israel for the express purpose of repressing, brutalising, and killing Palestinian people. After being “battle-tested” (in Elbit’s words) on Palestinian civilians, it is then sold on the global market to some of the world’s most repressive regimes.

This is how you climb up and take down the #London headquarters of Israel’s largest arms company. #ShutElbitDown pic.twitter.com/vKKa0x3hAW

But hindering Elbit isn’t all that PA has done. It says it’s forced the firm to increase spending on security to keep PA activists out – a move which doesn’t seem to have worked very well so far.