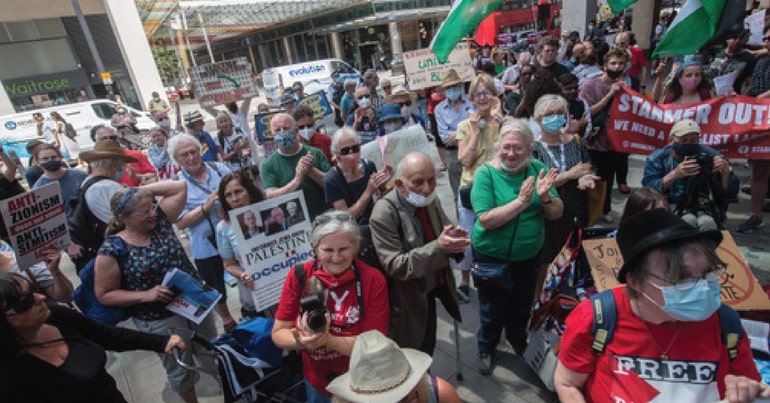 Following months of Labour Party purges, resistance group Defend the Left! has promised a “September Storm” of protest. The month of action will include meetings, protests, and a “major demonstration at the party’s conference”.

‘McCarthyism’ in the Labour Party

Defend the Left! is spearheading the protests in coordination with groups like Jewish Voice for Labour and Labour In Exile Network. A spokesperson for Defend the Left! said:

What we are seeing in the Labour Party is nothing less than a McCarthy-style purge without regard to democracy or justice.  This September we are going to call a halt. We will create a storm of opposition.

Labour recently banned several left-wing groups from the party. The spokesperson explained how Labour is now pursuing members with any links to the proscribed groups:

It’s totally unfair. Often the evidence used against members is just their presence at Zoom meetings held by the groups BEFORE the groups themselves were banned. How can Keir Starmer call himself a lawyer and preside over this blatantly unjust proceeding?

Since Keir Starmer became leader, we have seen a dramatic intensification of attempts by a right wing faction to hijack the party and drive out the left. But we’re not going to let them succeed. We, the grassroot members, are going to stop them.

The September Storm will begin with an “emergency meeting on 14 September. The recently banned Ken Loach will be addressing it.

A press release from Defend the Left laid out the rest of the month’s activities:

On Saturday 18 September there will be a one day event aiming to unite the left in opposition to the ban, organised by the  Don’t Leave, Organise group and supported by key trade unions.

On Monday 20 and Tuesday 21 September Labour members will stage protests in locations across the country, followed by a mass protest in Brighton on Saturday 25 September on the opening day of Labour’s national conference. And there will be a series of events and meetings opposing the purge throughout the period of the conference.

This is not simply an internal Labour Party struggle — this is a battle for democracy. Labour is  the biggest political party in Western Europe — we cannot allow it to be stolen from its members by dirty tricks and ruthless chicanery.