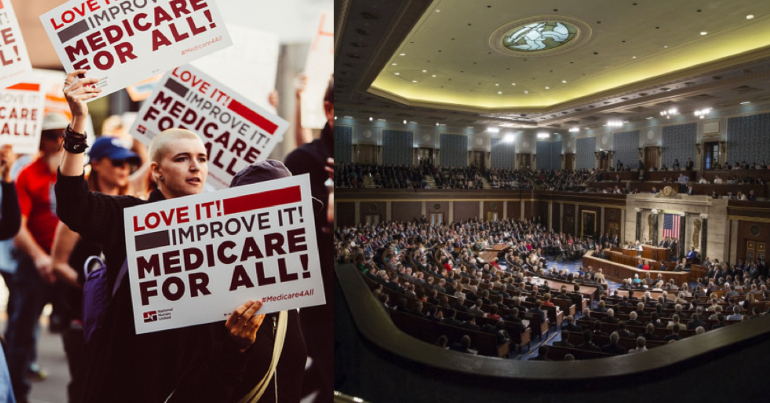 Last year’s US midterm elections saw a new wave of progressive Democrats elected to congress, including people like Ilhan Omar, Alexandria Ocasio-Cortez, and Rashida Tlaib. One of the key proposals that got them elected was universal healthcare. This is in a country that remains the only OECD state not to provide healthcare to all its citizens as a right. But now, there are signs this may finally end.

On 27 February, Democrats introduced a bill in congress that would provide all US residents with healthcare coverage. The proposal is known as ‘Medicare-for-all’, because it would extend ‘Medicare’ – a government-provided health coverage program for over 65s – to all people regardless of age. It would also expand Medicare’s provisions to include prescription medication, dental, vision, and long-term medical care; and it would end the system of charging patient ‘co-payments’, ‘premiums’, and ‘deductibles’. Perhaps most crucially, it would allow the government to negotiate directly with pharmaceutical companies. This model, already widely adopted across Europe, Canada, and Australia, has consistently proven more effective in bringing down drug prices.

Rep. Pramila Jayapal introduced the bill. And over 100 other members of the House of Representatives, all Democrats, signed on as ‘co-sponsors’. The bill doesn’t yet contain a blueprint for how to finance the proposal or how much it will ultimately cost. But Jayapal said that possible funding mechanisms, such as increasing taxes on the wealthy, will be released shortly.

Unlike the reforms of Barack Obama, this proposal would completely overturn the private insurance system. So if it became law, it would completely end the need for people to buy health insurance – leaving just optional ‘top-up’ plans like Bupa in the UK. As a result, the bill is likely to face fierce opposition from the private health insurance industry, which stands to be decimated by any kind of public healthcare model.

The Republican Party and the establishment wing of the Democratic Party, meanwhile, receive huge amounts of campaign money and other funding from this industry. So they will fight tooth-and-nail against the bill. (The Canary previously reported on a slideshow from a leading aid to House speaker Nancy Pelosi to health industry personnel. This suggested that Pelosi and other establishment Democrats plan to derail any universal coverage proposal once it reaches the House floor.)

Republican members also plan to use the proposal as a weapon against Democrats in upcoming elections. Universal healthcare has long been part of their ‘red scare’ arsenal, which they use to say Democrats are involved in a ‘socialist/communist plot’. During the 2008 election campaign, they used this tactic to smear Obama. Then vice-presidential candidate Sarah Palin fabricated the infamous tale of ‘death panels’ in which the government would purportedly decide who gets ‘rationed’ care and who is ‘left to die’.

Leaving people to die? That’s what happens already, under the current system.

In reality, it’s the current US system that leaves people to die. According to a Harvard University study, around 45,000 people die in the US every year due to a lack of access to healthcare coverage. Hundreds of thousands more go bankrupt every year as a result of an inability to pay incurred healthcare costs. And in a bizarre irony, the US spends about twice as much on healthcare as a percentage of GDP than comparatively developed countries, yet ends up with worse public health outcomes.

Perhaps because of this reality, and in spite of Republican scaremongering, polls consistently show that the vast majority of US voters, and even a majority of Republicans, favor some form of universal coverage.