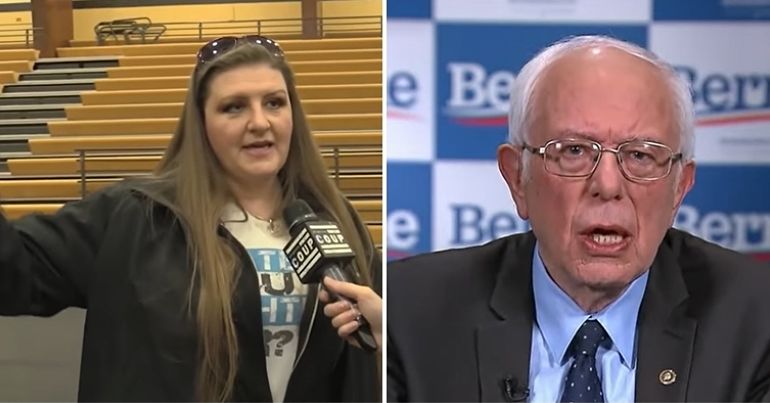 Flint water campaigner Melissa Mays came out in support of Bernie Sanders after he addressed a town hall meeting in the Michigan city on 7 March. Flint has been at the centre of a water crisis for almost six years. In fact, by 9 March, the city had gone over 2,140 days without clean running water.

"People think that we're all fine…people are like 'Flint has clean water.' From where?" –@FlintGate (Melissa Mays)

This Flint water crisis began on 25 April 2014 when city officials decided to shift water suppliers. They did so to save money. And since then the people of Flint:

have been consuming and paying 8 times the national average for water contaminated with TTHMs (carcinogenic byproducts), ecoli, lead, copper and many other heavy metals.

Soon after this shift, residents noticed a foul taste and smell coming from their water. Research then revealed that lead levels had spiked across the city and almost 17% of samples registered above the federal “action level”. This is the level at which corrective action must be taken. But city officials insisted the water was safe.

Then, in September 2015, further research revealed elevated blood lead levels in children had almost doubled since 2014. In fact, they had nearly tripled in certain neighbourhoods. The majority of the population of Flint is Black. And in February 2017, a report found “deeply embedded institutional, systemic and historical racism” indirectly contributed to Flint’s contaminated water crisis.

In April 2018, the governor of Michigan, Rick Snyder, declared the quality of the water in Flint had been restored. But in August 2019, Michigan state warned that Flint was in violation of the Safe Drinking Water Act.

Furthermore, as Mays emphatically stated in an interview on 8 March:

One thing that bothers me is… liberal white people saying, ‘well the best you can do is hope for incremental change’. They’re just little changes.

Mays went on to underline how she feels about that mentality, and how serious the problem really is:

Well let me tell you, Flint’s been dealing with your ‘incremental changes’, which means no changes, nothing for us anyway, for 2,143 days. We have been patient, we have been civil –  because I’ve been told that we have to be civil… don’t attack other people, don’t disagree with them, just sit there and take your poisoning and be quiet. And these are from supposed Democrats. We have a lot of Republicans that are like, ‘chug your poison water it’s your fault’, so at least they’re clear on where they stand.

Mays then explained they still do not have clean water. And what little progress they have made has been hard fought and through legal action. She said:

You know the lawsuit that I’m part of forced the state to replace our lead and galvanized steel service lines. We still have damaged water mains that feed to those service lines, and then the interior of our homes, nobody’s touching that.

Why it has to be Bernie

Mays underlined further why “we need [Sanders]”. She explained how life in the US can be financially “crushing for working people; it’s crushing for the poor”. And until now at least, the message has been “basically the poor and poisoned, hurry up and die faster.”

Sanders supports the basic human right for the people of Flint to have clean water. And as he has done with the rest of his campaign, he’s putting the “rights, freedoms, equality, and liberty” of all people front and centre.