Trump's tax returns reveal what we knew long ago. He's a tax cheat who's not even good at business. - The Canary 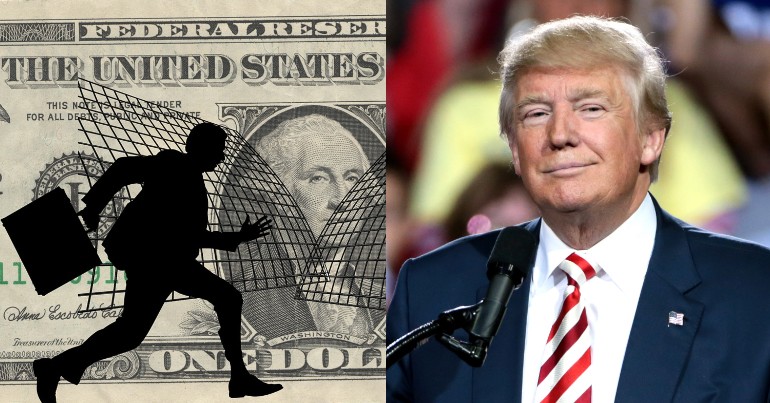 The New York Times recently released an extensive investigation into president Donald Trump’s tax returns. The report shows what has long been apparent to even the most casual observer of US politics – that Trump is a serial tax dodger and also a lousy businessman who has lost billions.

But there is something even worse going on. Much of the shady tax manoeuvring that the New York Times uncovered is perfectly legal. And that, in turn, raises deeper, structural questions about the prevailing modern taxation system in the US and further afield.

On 27 September, the paper released a report chronicling its year-long investigation into Trump’s tax records. It found that Trump had paid zero dollars in federal taxes for 10 of the previous 15 years before he became president in 2016. It further found that upon entering the White House, he paid just $750 (no, that isn’t a typo) in federal taxes in 2016 and that same amount again in 2017.

This is in spite of the fact that Trump is, as he himself is keen to remind people, a multi-billionaire with vast business holdings across the world. Trump had fiercely resisted any attempts to delve into his financial affairs and refused to voluntarily share his tax returns. This violates a long-standing convention that presidential candidates do so prior to an election. A video released by campaign staff of Democratic Party rival Joe Biden, who Trump will face in the upcoming November presidential election, showed comparisons with the amount of tax paid by workers. All of them paid much more in tax than Trump, often by a factor of ten or more, in spite of earning, in all likelihood, far less than Trump.

Progressives have reacted by pointing to the social spending that could easily be covered if only this kind of tax avoidance had been dealt with. Vermont senator and former Democratic Party primary candidate Bernie Sanders, for instance, tweeted:

Trump's not alone. Over a three-year period, the top 1% avoided $800 billion in taxes. That's enough to:

Yes. The 1% have got to pay their fair share of taxes.

Facing financial catastrophe, and not for the first time

Trump apparently could soon be facing serious financial difficulties owing to his actions. According to the New York Times report, Trump owes hundreds of million dollars to debtors, and possibly tens of millions more to the US’s Internal Revenue Service. And this wouldn’t be the first time that Trump faced financial ruin either. On the same day that the New York Times released the findings of its investigation, the Washington Post reported that Trump narrowly averted financial disaster in the early 1990s. To avoid personal bankruptcy, which was reportedly being threatened by creditors, Trump had his lawyer and accountant visit his father to hastily change the terms of his will. Trump’s father was 85-years-old at the time and was diagnosed with dementia just a short time after.

As The Canary has reported on multiple occasions, Trump’s claim to be a self-made millionaire is completely bogus. He simply inherited his fortune from his wealthy father, who had enriched himself in the early 20th Century via a series of sleazy property ventures, which ironically were made possible by public spending by the federal government. Donald Trump has, in fact, lost billions throughout his checkered business career. And this career was probably only viable in the first place due to the fortune he inherited from his father. As Sanders put it in a Twitter post, “Trump’s tax returns tell us that he’s either a very bad businessman or a tax cheat—likely both”.

Probably criminal, but is that really the point?

Some commentators have gone so far as to describe Trump’s tax dodging as criminal. Journalist David Cay Johnson recently wrote, “there’s lots of evidence that Donald Trump is a criminal-level tax cheat”. In December 2018, The Canary spoke with tax expert Kenneth Boyd who said of allegations stemming from an earlier New York Times exposé, which examined Trump’s inherited family wealth: “Some of them, if true, could be serious cases of illegal tax fraud”. But the reality is that much of Trump’s tax avoidance was done perfectly legally.

It appears that Trump managed to successfully avoid so much tax via a set of arcane rules that allow businesses to (mis)categorize profit as the income of the businesses’ owners. As a result, Trump was able to ‘write off’ huge business losses from his global portfolio of hotels and other properties. The numbers are quite staggering, with Trump reportedly getting a $72.9m refund from losses allegedly incurred from the failure of his chain of casinos in Atlantic City – a gambling hotspot near New York.

What should really make us angry

As a result of the US’s tax code being heavily skewed in favor of business owners, this is possible due to its extensive system of ‘deductions’. Predictably, since taking office Trump has worked in lock-step with Republicans in congress to tilt this system even further toward corporate America. In 2017, for example, congress enacted the so-called Tax Cuts and Jobs Act, which according to Steve Wamhoff of the Institute on Taxation and Economic Policy, “opened new tax avoidance opportunities for wealthy business owners”.

In short, to focus on Trump himself is to miss the point. The kind of tax dodging exposed by the New York Times is made possible by a system deliberately put in place by the US political class and its corporate paymasters. As the chair of advocacy group Patriotic Millionaires, which encourages wealthy Americans to support progressive taxation, put it:

The American people should be angry about President Trump’s tax evasion, but that’s not all. They should be much more angry about how much of what Trump did is legal.

The American people should be more angry about how many other millionaires and billionaires are able to avoid supporting the country that made them rich in the first place.