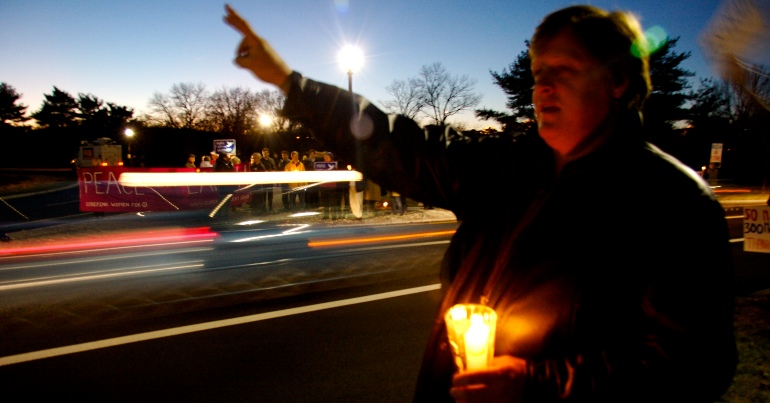 US activist and lawyer Kevin Zeese, renowned for his role in opposing US imperialism and the ‘War on Drugs’, has died at the age of 64. Most recently, he was a central figure in the ‘Embassy Protection Collective’ – a group formed to defend the Venezuelan Embassy in Washington, DC from right-wing agitators who attempted to seize the embassy on behalf of the coup leaders’ US representatives. He was one of the final four embassy protectors who were arrested following a raid of the building by US Secret Service police.

The Canary wishes to express its heartfelt condolences to Zeese’s family and his huge network of comrades, friends, and fellow travellers in the struggle for a better world. His death represents a sad loss for the peace movement and US progressive politics more broadly. But he leaves behind a legacy of activism and intellectual insight that will remain as a lasting symbol of his life’s work and serve as an inspiration to those who strive for a better world.

A sudden and unexpected loss

Zeese died in the early hours of 6 September at his home in the mid-Atlantic US city of Baltimore. Early reports about his death say that he died suddenly of a heart attack. He is survived by his partner Margaret Flowers, a paediatrician and fellow activist who was also one of the four embassy protectors arrested inside the Venezuelan embassy last year.

The Canary understands that both he and Flowers had contracted coronavirus (Covid-19) early this year but survived without needing hospitalization. It is possible, but at this point unproven, that this was a contributing factor in his death; respected popular science magazine Scientific American reported last month that “COVID-19 Can Wreck Your Heart, Even if You Haven’t Had Any Symptoms”.

A staunch opponent of US imperialism and upholder of international law

Zeese spoke to The Canary about the situation at the Venezuelan embassy last year. He was part of a group of activists staging a sit-in in order to resist a takeover by supporters of Venezuelan coup leader Juan Guaidó. As The Canary reported at the time, they were not ‘occupying’ the building but were rather defending it from a hostile takeover. As the guests of the legal tenants, the diplomatic staff of the actual Venezuelan government, they were upholding international law and the diplomatic protocol established by the Vienna Convention.

Following his and Flowers’ arrest along with Adrienne Pine and David Paul, they were sentenced to six months of probation and each fined $750. Though still disappointing, this was nonetheless seen as a major victory given that federal charges – which could have led to up to a year in prison and/or a $100,000 fine – were dropped.

At the time of his death, Zeese was serving as the press secretary of Green Party US presidential candidate Howie Hawkins. He was instrumental in coordinating The Canary’s exclusive interview with Hawkins earlier this year. Zeese took a particular interest in the Green Party’s fight against voter suppression and was recently involved in a struggle against attempts to get the party off the ballot in the midwestern US state of Wisconsin.

He was also previously a key figure in the group ‘Stop the Machine! Create a New World!’, which joined forces with the Occupy movement in 2011 and helped organize the Washington, DC Occupy encampment. He ran for the US Senate on the Green Party ticket in 2006 but was not elected.

In earlier years, Zeese was known mostly for his advocacy against the ‘War on Drugs’. For a time he served as the director of the National Organization for the Reform of Marijuana Laws, which campaigns for the legalization of cannabis, and also co-founded the Washington-based NGO Drug Policy Alliance. He also campaigned against the devastating effects of the drug war in Latin America and was an early critic of the US government’s involvement in crop spraying – where chemicals are released onto fields allegedly used for growing plants used in the production of controlled substances.

Like many activists, Zeese was a prolific writer and, along with Flowers, ran the Popular Resistance website for many years. The organization coordinated the ‘Solidarity School’ which provided training to activists in organizing and social transformation. He also contributed articles to progressive publications including CounterPunch, AlterNet, and Truthdig, and even occasionally successfully placed articles in mainstream publications such as The Wall Street Journal and The Washington Post.

Zeese was born in New York City in 1955 and received an undergraduate degree from the State University of New York, Buffalo. In 1980, he moved to Washington, DC to study law at the George Washington University and remained in the Greater Washington/Baltimore area for the rest of his life.

He was fearless, committed and certainly heroic in his role in protecting the Venezuelan embassy and also in resisting war and fighting for a better world for everyone on the planet. He was a staunch anti-imperialist and an invaluable Green Party leader. It’s a great loss and we’re going to miss him. But I’m sure his partner Margaret is going to continue the struggle they were both involved in.