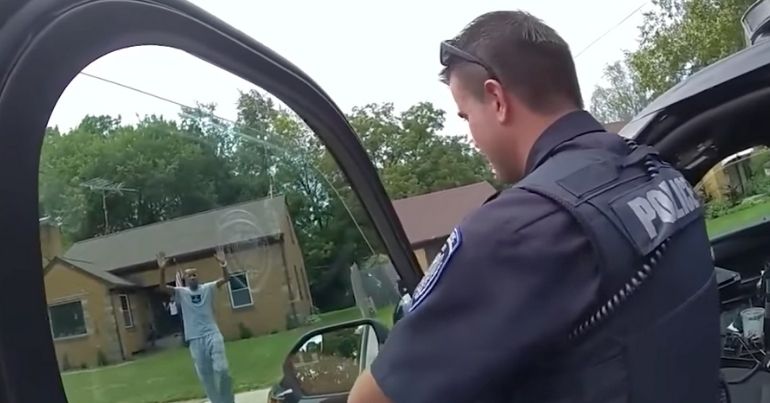 On 1 August, a Black estate agent was showing a house to a Black man and his teenage son when police officers arrived at the property with their guns drawn. Footage shows the armed officers handcuffing the three when they left the house.

Police later said racial profiling was not a factor in this case. However, when responding to the decision of US Senate Democrats to vote with Republicans to penalise “local governments that defund the police”, Black Lives Matter has demanded:

we must divest from the systems that are killing us and reimagine public safety as a public health imperative for Black people.

Estate agent Eric Brown was showing Roy Thorne and his 15-year-old-son a property in a Wyoming suburb. The home was the site of a previous arrest on 24 July. A neighbour called police on 1 August, incorrectly reporting that the suspect had returned and entered the house.

Footage shows officers ordering the two men and the teenager to leave the house in single file with their hands in the air. Officers placed all three in handcuffs. According to Thorne, police kept their guns drawn until each of them was in handcuffs. Fearing for his son’s life, Thorne stepped out in front of the 15-year-old in case police opened fire.

They didn’t come there to talk. The way that they moved around the house… It flipped from we’re showing a house to we need to make it out of here alive.

I trusted that we were in danger, very serious danger.

A classic case of racial profiling?

Brown told reporters that he felt that the neighbour and police had racially profiled the himself and his clients. But on 6 August, Wyoming police issued a statement claiming that racial profiling wasn’t a factor in the incident. It said:

After a thorough internal review of the actions of each of our public safety officers who responded to this incident, we have concluded race played no role in our officers’ treatment of the individuals who were briefly detained, and our officers responded appropriately.

While it is unfortunate that innocent individuals were placed in handcuffs, our officers responded reasonably and according to department policy based on the information available to them at the time

White onlookers’ weaponising of the police against Black people is nothing new. In 2020, a number of viral videos circulated social media showing white people calling, or threatening to call the police on innocent People of Colour.

If you see people – Black people, any minority – don’t report people doing normal things. You do that, you don’t realize that you can change their life or have their life taken, just you making a phone call. In this instance, it could have been three.