I went to parliament to meet people fighting for their human rights. And what I saw shocked me [VIDEO] - Canary 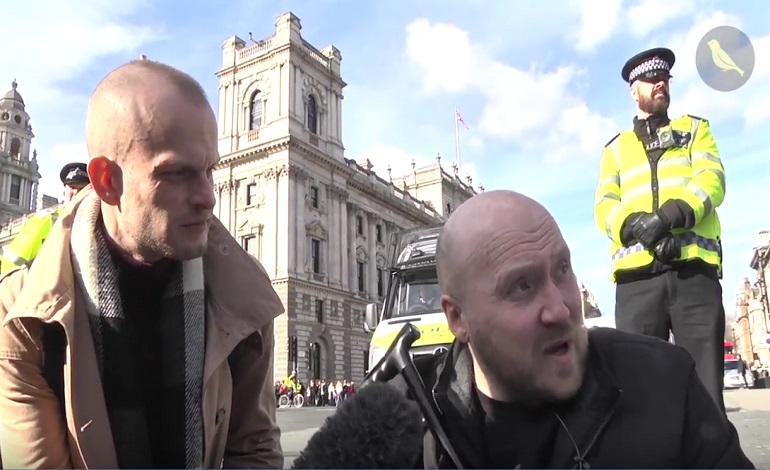 On Tuesday 7 March, I was out in London. And I took the opportunity to meet a group of people fighting for their most basic of human rights in the UK. But what I found should shame political leaders.

The Disabled People Against Cuts (DPAC) group was raising awareness of the government’s cuts to Personal Independence Payments (PIP). These cuts will see benefits stripped from 160,000 people living with mental health issues. Benefits they’re entitled to. But it was also highlighting the fact that successive governments have treated disabled people disgustingly. So much so that the UN has said that “grave” and “systematic” violations of disabled people’s human rights have occurred.

Disabled people are angry. But they have every right to be. Not only has the UN said that their human rights have been violated, but it has also insisted that they have been disproportionately affected by Tory austerity. Twice. Meanwhile, nearly 600 people have taken their own lives after being found ‘fit-for-work’ by the Department for Work and Pensions (DWP). Additionally, DWP ‘fit-for-work’ assessors have been asking claimants “Why haven’t you killed yourself, yet?”. And 90 people a month die after being found ‘fit-for-work’.

And the politicians’ response to disabled people? The Conservatives ignore them. Labour makes promises it doesn’t keep – saying it would chair debates last November which still haven’t happened; asks the public to sign petitions; and generally wrings its hands while mouthing platitudes. I’m unsure where the Lib Dems are, currently. But at least the Green Party appears to be onside. For the moment.

It is a scandal that, in one of the richest countries in the world, the UN has had to intervene over people’s most basic human rights. But the real scandal is that, while people are dying every week, politicians don’t treat the “genocide” committed against disabled people as the emergency it is.