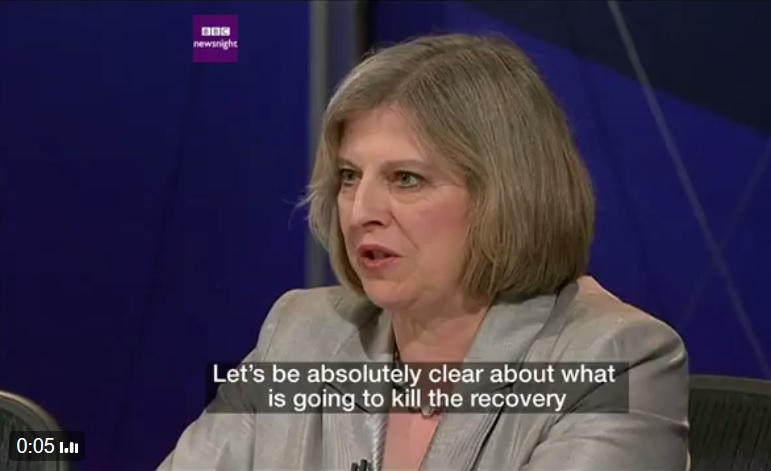 An embarrassing video of Theresa May is circulating on the internet. It’s of the now Prime Minister passionately using a Tory Party soundbite in 2010, right before the general election.

But that soundbite has now, frankly, come back to bite May in the arse:

Here is a video of Theresa May absolutely opposing the "Jobs Tax" that she introduced today. pic.twitter.com/0ScIdLODq6

In the 2010 Question Time video, panellists are talking about the Labour Party’s proposed National Insurance contributions (NIC) increase. The Foreign Secretary at the time was David Miliband. And addressing Miliband, then Shadow Work and Pensions Secretary Theresa May said:

At that time, the UK was still recovering from the 2008 financial crash. And “jobs tax” was Tory speak for the NIC increase. But clearly, the Conservative Party was totally against it. Which is weird, because the Tory government has now confirmed it’s bringing in its very own “jobs tax”.

In the budget announcement on 8 March, Philip Hammond revealed that NICs for the self-employed are going up. Despite his party pledging it would not “raise VAT, National Insurance contributions or Income Tax” in its 2015 manifesto. The very manifesto that got the Conservatives back into power.

So why the change of Tory heart?

It’s all about targets

Politicians are, of course, notorious for saying whatever is necessary to win votes. And then backtracking on those promises once in power. But there’s something more at play in this situation.

The Labour Party’s NIC increase in 2010 was for businesses. It caused uproar among business leaders, with many throwing their weight behind the Tories’ opposition.

But business leaders aren’t the target of Hammond’s new increase. Self-employed workers are. Millions of them, in fact. Many of whom earn less than half the national average wage.

So the Tories opposed an NIC increase that shored up their votes and the interests of the moneyed classes. But they’ll willingly increase NIC for ordinary people.

Ever wonder who the Tories really work for? Now you know.