Yes, we've seen the 'vibrant young woman' video. No, we're not over it yet [VIDEO] - Canary 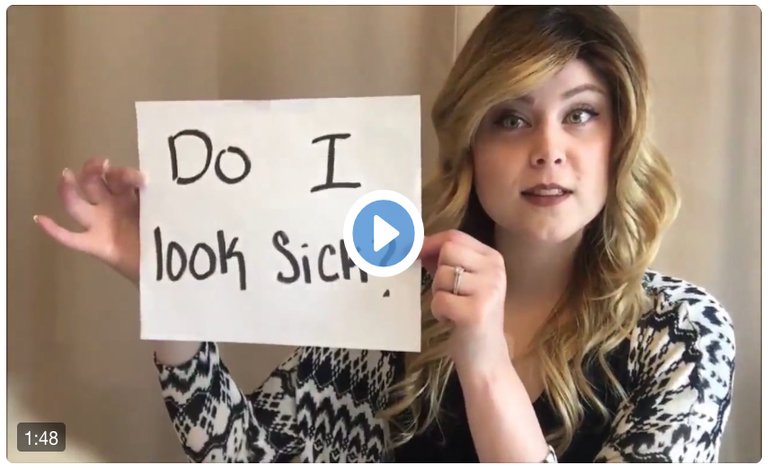 A video message from a ‘vibrant young woman’ is breaking hearts, but may also change some minds. Spoiler alert: the young woman is terminally ill. Her message is being shared widely to oppose welfare cuts to people in Britain living with chronic and terminal illness, and disability.

A message from a ‘vibrant young woman’

A young woman in boutique attire addresses the camera. And reminds us that illness doesn’t always look like we expect it to. She is in fact living with a terminal illness.

She moves aside her top to reveal the port (a tube into her body) through which she receives nine infusions a month. She lifts her top to reveal her midriff. This is where her feeding tube resides. It pumps food directly into her stomach. And that hair? A wig. She lost hers to chemotherapy.

The video is a reminder to the government and to citizens that we have no idea what journey the person next to us may be on.

A little about that ‘vibrant young woman’

Chanel White has been charting her journey through chronic illness at The Tube Fed Wife blog. She was a newly-married 19-year-old when she was diagnosed with mixed connective tissue disease. She writes about that first year powerfully, providing an insight into life in a country without an NHS:

A year and a half riddled with pain, uncertainty, emotional instability, the loss of our first home, mounds of medical debt, and more doctors appointments and procedures than I could count. Eventually the Raynauds become so severe, and the ulcers so common that my physician referred me to an orthopedic surgeon for a Digital Sympathectomy; a surgery to remove the nervous system responsible for the blood vessel dilation in your palms.

I once was a healthy vibrant young woman, and now I was someone I didn’t even recognize. I was on more medication a day than I could count, enduring weekly chemotherapy injections, hospitalized multiple times a year, at the doctors office at least four times a week, and now adding surgeries to my list.

But six years later, Chanel is still fighting. Her story turned around in 2014, when she was put forward for a clinical trial for severe, treatment-resistant autoimmune patients. She no longer requires her feeding tube, and continues chemotherapy.

Meanwhile, the UK government is making life harder for people like Chanel White. The government’s own statistics show that, between 2010 and 2011, 10,600 sick and disabled people died within six weeks of their work capability assessments by Atos and the Department of Work and Pensions (DWP).

We could do with some compassion

49-year-old Linda Wootton was taking 10 medications each day after a double lung and heart transplant. She was weak and suffered regular bouts of blackouts. She was put through the Atos Work Capability Assessment. The DWP told her she was ‘fit to work’. She died just nine days later. Her husband Peter said:

57-year-old Brian McArdle suffered a stroke on Boxing Day 2011. The stroke left him paralysed down one side, blind in one eye, unable to speak properly and barely able to eat and dress himself. Following his Atos work capability assessment, he was deemed ‘fit to work’ by the DWP. The day after the the government stopped his benefits, Brian died of a heart attack. His 13-year-old son Kieran told the Daily Record:

29-year-old Colin Traynor lived with epilepsy. He was deemed ‘fit for work’ too and forced to enter a lengthy, bureaucratic process to appeal the decision during which, the government stopped his welfare payments. He did not live to see the result of his appeal. Five weeks after his death, Colin’s family received the news that his appeal was successful. His father Ray said:

The government quickly stopped counting the number of people dying while undergoing work capability assessments. But as the project only accelerated, we can safely assume that things have at the least remained the same. At the rate at which people are dying, these three represent the death toll in only the last three hours. This is not the occasional poor decision. This is a Linda, a Brian, or a Colin – every hour, all day, every day, dying because this system is designed to throw people off social security. Whether they need it or not.