The BBC accidentally broadcasts a Daesh video, an hour after the attack on London [VIDEO] - Canary 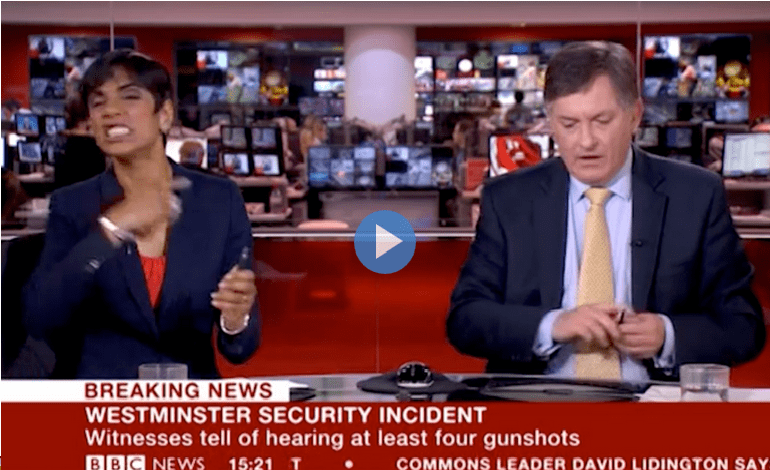 The BBC accidentally broadcast a video on Daesh (Isis/Isil), an hour after the attack on London. The presenter then panicked:

The reporter made a ‘cut throat’ gesture, than appeared to mouth “sorry” afterwards. Given the events surrounding the tragedy in the capital, this motion was perhaps insensitive.

On 22 March, an unnamed assailant drove a hired car into Westminster bridge, killing two people. Crashing the car outside parliament, he stabbed an unarmed police officer who later died from the injuries. Armed police then shot him. At least 40 people were injured.

The reporter appeared to mouth “sorry” after making the gesture. Broadcasting a clip that may be seen to link the attack to Daesh was also unfortunate.

The clip that the BBC mistakenly played was from a two-day summit on Daesh that took place this week. Ministers from 68 different countries gathered to coordinate plans to defeat the terrorist group.

The clip has been shared over 3,000 times on Twitter.

Daesh has sought to claim responsibility for the attack:

But The Guardian’s Jason Burke offers the following analysis:

this useful. Vocab of ISIS claim indicates that group did not have prior knowledge of #londonattack, as does lack of biog details. https://t.co/9HOqdRjrFU

If Daesh coordinated the attack, Burke argues the group would likely offer the name of the attacker or some other hint of proof. Daesh may want to claim as much responsibility for attacks in order to strengthen itself in Western perception.

Not the only blunder…

The accidental broadcasting of the conference on Daesh was not the only blunder from the BBC. Today host Nick Robinson also read out a fake London tube sign on Radio 4. The sign was widely shared as if it was a real message written by London Underground staff.

The image was made using an online tube sign generator. Many who shared the image later clarified that it was fake, including Robinson:

Well, you learn something every day. That lovely tube sign might be "fake" but the sentiment isn't for thousands sharing it @BBCr4today https://t.co/qrnD3JU9xW

On BBC Newsnight, after the attack, Guardian columnist Simon Jenkins made an intervention. Jenkins said that the BBC “opted with the terrorist” in giving so much “prominence” to the attack:

You have a choice of prominence. And the prominence given to them now is aiding and abetting terrorism. I really feel that. You should choose to treat it as a crime.

The journalist feels that, while we shouldn’t ignore such attacks, giving so much attention to perpetrators can encourage others. The husband of the late MP Jo Cox echoed Jenkins’ comments:

I think one of the things we need to be careful about is giving notoriety to the person that did it. I think one of the reasons people do these horrific things is to gain personal notoriety and I would much rather remember, as Frank Gardiner was just talking about, the heroes of this story

The risk of dying in a terrorist attack is incredibly low. Statistically, we are more likely to die from lightning. That should be emphasised, while not diminishing the tragedy of those who died. It is the aim of terrorist attacks to terrorise people. Media outlets and politicians exaggerating the threat is what they desire. Like how Daesh tries to claim responsibility for atrocities in order to inflate its strength.

The BBC broadcasting blunder was unfortunate. But giving extremists the notoriety and reaction they seek would be more so.

You can view Jenkins’ comments here:

The Canary is following developments here.