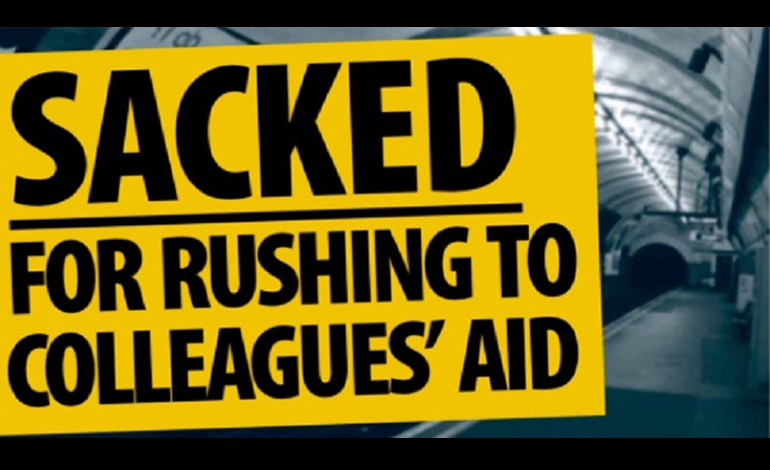 A tube worker has been sacked by London Underground Limited (LUL) for allegedly going to help a pregnant colleague who was being ‘assaulted’ by a ‘fare evader’.

On 16 November 2016, Kirsty Watts, who was five months pregnant at the time, was allegedly pushed in the stomach by a fare evader. The incident happened at the northern gate of London Bridge tube station. She radioed for help, and the message was picked up by Lee Cornell, a Customer Service Assistant at London Bridge.

The National Union of Rail, Maritime and Transport Workers (RMT) claims that, when Cornell arrived at the scene, the assailant:

punched Lee twice and stole his glasses. Lee reacted to get his property back and prevent a further assault on him. He pushed him into a wall and when he got his property back he walked away. The fare evader continued to try and fight any other LUL staff who came near him. He even tried to head butt Lee Cornell again. Lee never reacted. He once again walked away.

Two other LUL staff have also allegedly been “sanctioned” by the company. And Cornell has been summarily dismissed (that is, without investigation or notice) over the incident. The RMT claims the reason LUL gave was because Cornell “lost control”.

But RMT claims that LUL is being “entirely duplicitous” and running a “dirty tricks” campaign against Cornell and Watts. It says that:

The RMT is balloting members for strike action over Cornell’s dismissal.

Just who do they work for?

LUL is a subsidiary of Transport for London (TfL).

Following an appeal process the decision to dismiss this member of staff was upheld. Our investigation into this incident included reviewing extensive CCTV footage. We are satisfied that his conduct on that day was not in line with the standards we expect from our staff. We take a zero tolerance approach to violence against our staff but similarly expect our employees to adhere to acceptable standards of conduct and behaviour when dealing with members of the public.

If what the RMT is saying is true, it raises serious questions about who LUL, and TfL, actually represent. Workers on the tube are there to help and protect London’s millions of commuters. But this shouldn’t mean that they are subject to abuse and violence. Nor should it mean that their employers treat them so appallingly.