NHS workers have spoken. The general election is our only chance of saving the health service [TWEETS] - The Canary 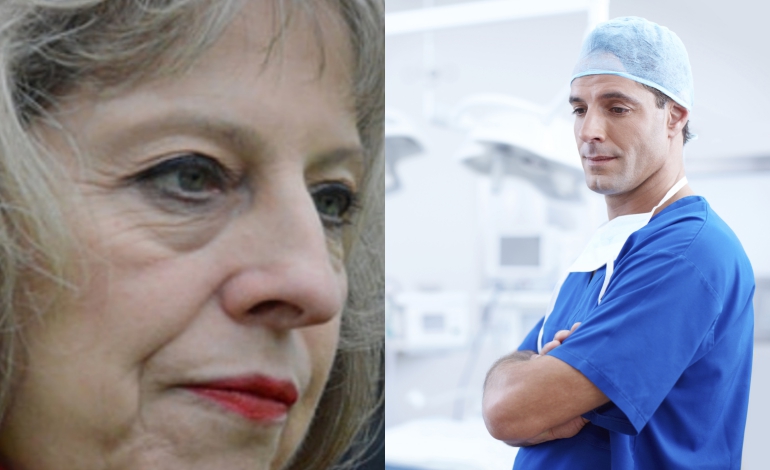 NHS workers across the country are giving us all a clear message. If we want to save the NHS, we have one opportunity. And it’s the general election. If a Conservative majority is returned, then it will be too late.

As a manager in the NHS I have a #publicduty to tell you that the Tories are strangling the NHS of resources, ensuring it has no future

The destruction of the NHS

Since the Conservative government came to power, it has had a mission of privatising the NHS. Health Secretary Jeremy Hunt even co-authored a book calling to replace the NHS with private insurance.

The Conservative government has slashed services and waiting times have grown. Also, Hunt has waged war on the junior doctors over their contracts, and he has also slashed bursaries for trainee nurses. And this is all against a backdrop of selling the NHS off to the highest bidder, with Richard Branson’s Virgin Care being one of the clear winners.

Things are so bad in the NHS that the Red Cross described the situation as a “humanitarian crisis”.

On average, 28% children and young people referred to CAMHS were not allocated a service.

And this was an average. In two regions, CAMHS refused [pdf, p4] access to services for 75% of children referred.

It’s not just the NHS

The message is spreading, with workers in other public sectors also speaking out. These included teachers:

As a teacher, I have a #publicduty to inform you that the Tories are gradually decimating our schools. Please don't enable them.#voteEdu

As a council officer I have a #publicduty to tell you that the Tories have cut your council's funding almost in half since 2010.

As a public interest lawyer it is my #publicduty to tell you that 7 years of legal aid cuts have our justice system on its knees.

The message is clear:

On 8 June, we have an opportunity. And we must grab it with both hands. Because the stakes couldn’t be higher. Not only our NHS but all our public services rely on us getting rid of the Tories. So don’t listen to the politicians. Listen to the workers and service users. Listen to what the people who are struggling in these sectors are telling you.

We all have a public duty. And it’s a duty not to ignore this message. It’s a duty to act. So register to vote; get to the polling stations. And do whatever you can do to get rid of the Tories. Because people’s lives and our services depend on it.