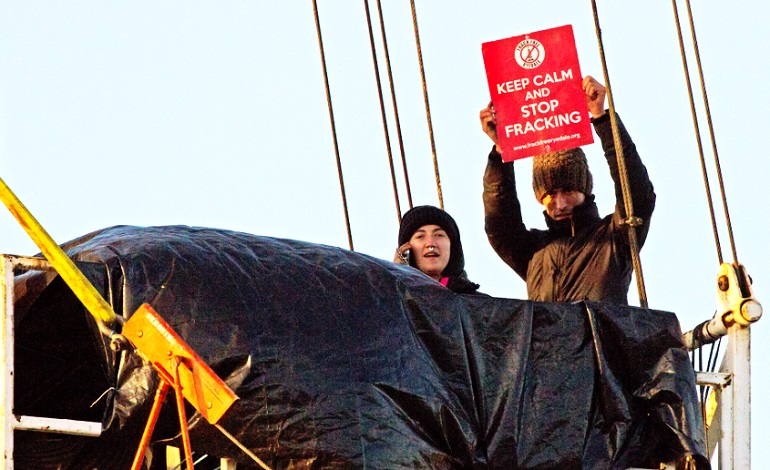 A small Yorkshire village is at the centre of a brewing storm after the entire operations of a fracking company were stopped in its tracks.

The government has granted Third Energy a licence to extract shale gas via fracking at a site, known as KM8, in the village of Kirby Misperton in North Yorkshire. The county council granted Third Energy planning permission in May 2016, but local residents and campaign group Friends of the Earth went to the High Court to challenge the decision in December.

The judge in the case ruled in Third Energy’s favour. And work has been progressing to prepare the site ever since. And on 10 October, the Environment Agency approved the company’s plans.

Meanwhile, also in December 2016, residents and campaigners set up the Kirby Misperton Protection Camp. It aims to highlight the opposition to fracking that exists in the area around the site. Demonstrations have been ongoing since the start of the year. But in the early hours of Saturday 21 October, the self-styled ‘protectors’ of the KM8 site took their demonstrations to the next level.

Three protectors scaled the rig equipment that is sat on the well where Third Energy is drilling, with the intention of occupying the equipment to stop the company’s work: 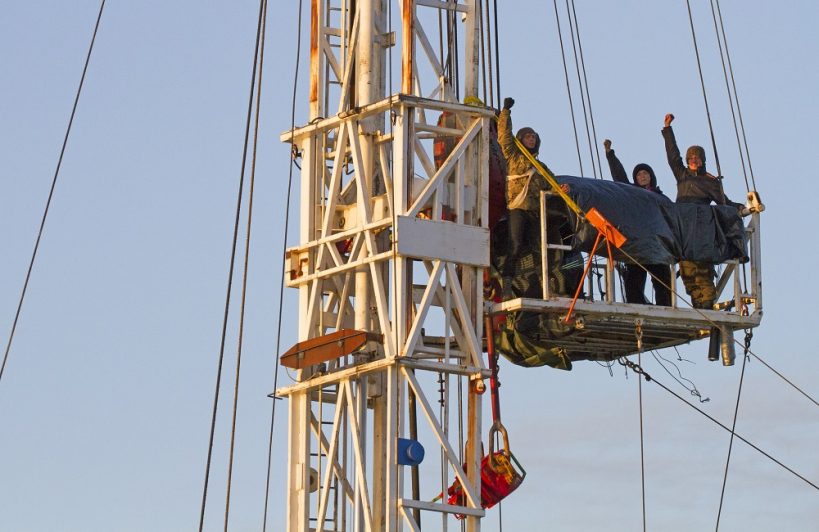 The three protectors alighted the rig with supplies and intended to stay put for as long as they could. The group told The Canary they took the action because they feel:

Compelled to make a strong and visible stand against this industry which threatens so much for all of us and future generations; drinkable water, clean air and the very stability of the land beneath our feet are in danger. 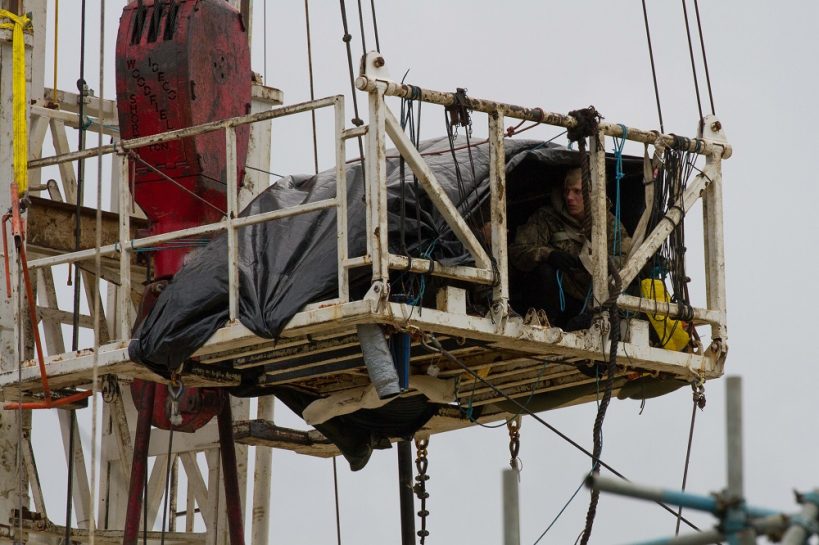 Crowds had gathered on Sunday 22 October to show support for the protectors: 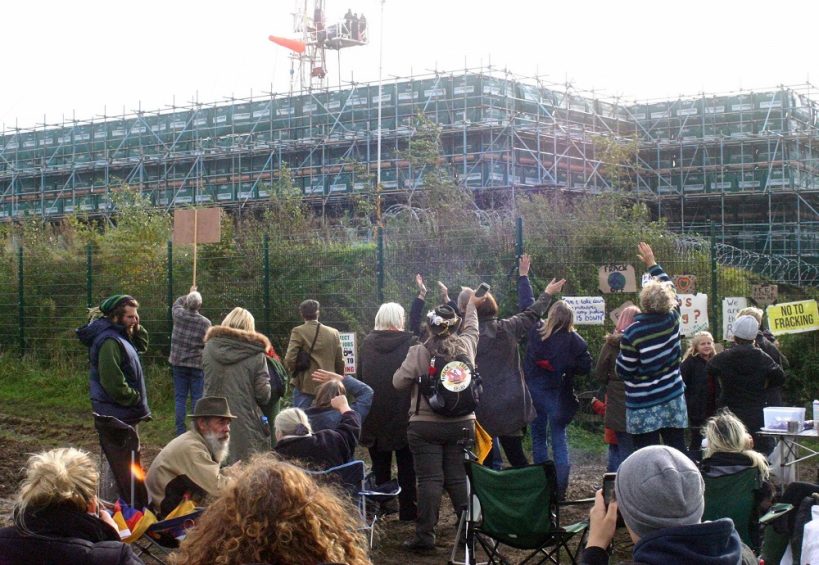 The protectors have stayed outside during the course of Storm Brian. And they have also resisted attempts by Third Energy and the police to remove them. One protector told The Canary:

Staying on this rig isn’t just about highlighting fracking as a serious threat. It’s about proving that we, the public, have the means to shut down and sustain the closure of a dangerous industry. Sitting through Storm Brian felt like nothing compared to the very real consequences if we allow fracking to continue.

But by 11.30am on 22 October a ‘specialist team’ drafted in by Third Energy had removed the protectors who were then arrested by the police: 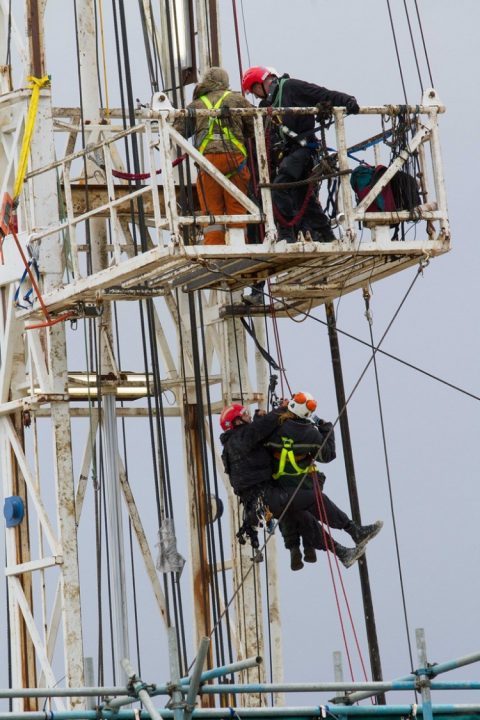 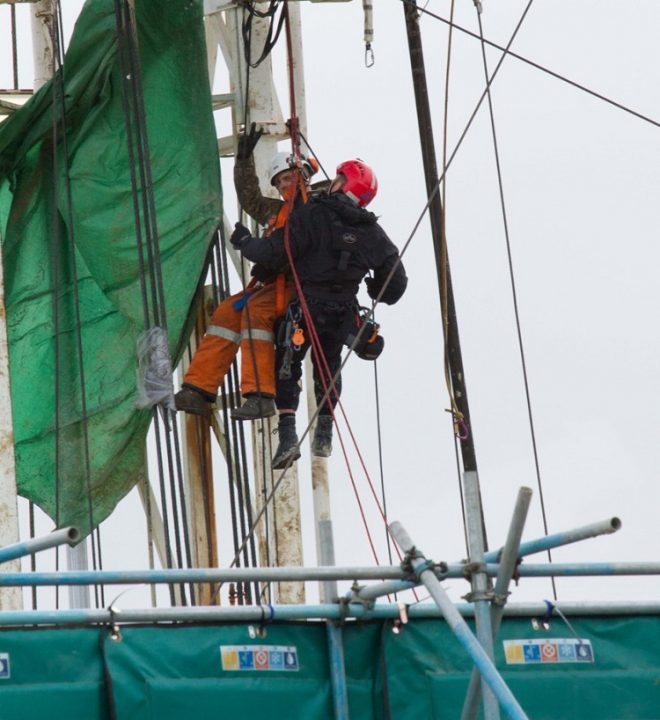 This action is the culmination of months of sustained campaigning against Third Energy’s operations at KM8. Protectors have accused North Yorkshire police of using “bullying tactics” after operations which culminated in the forcible removal of a great-grandmother who was serving hot drinks at the site. And as The Yorkshire Post reported:

In September and October so far, 48 people have been arrested in connection with protest activity at… [KM8]. Of those arrests, 36 have been charged, four have been cautioned, four face no further action, and four have been released under investigation while enquiries continue.

A spokesperson for Third Energy said:

The company strongly condemns this reckless action that potentially has serious health and safety consequences for both the intruders and the people working on the site. In particular, the intruders have been advised by police loud hailer of the serious risk created by open flames and sparks on a live gas site.

Campaigner’s concerns about fracking are over-arching. They range from polluted drinking water and earthquakes, to its contribution to carbon emissions. What makes it such a hot topic, though, is the public anger it provokes, witnessed at sites such as Preston New Road and KM8. And just this week, residents in Derbyshire also accused a fracking company of contaminating their drinking water. So, with public opposition to fracking growing across the country, if the energy companies thought the extraction of this controversial gas was going to be easy – they thought wrong.