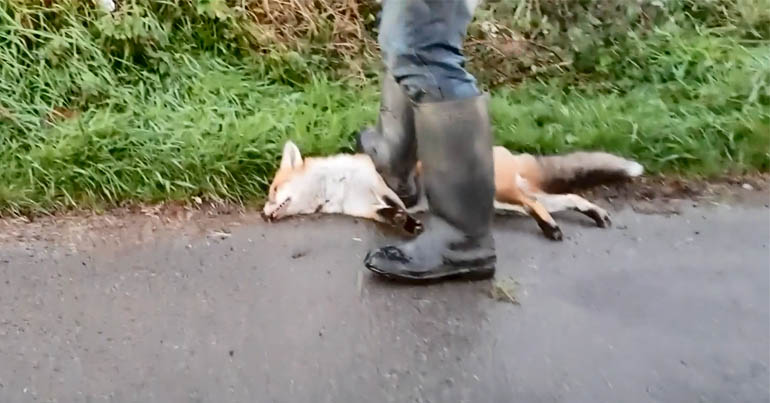 Hunt Investigation Team (HIT) has exposed the actions of a fox trapper in Wales. The news has led to calls for a ban on snares in the British countryside.

HIT published a report on David Sneade, who the group says traps and kills foxes in the Pembrokeshire Coast National Park area. Sneade then sells the fur abroad for as little as £15, HIT claimed. BBC News also stated that the “cost of a fox pelt today is about £15”. The UK government banned fur farming in 2000. But there is currently no law against snaring or trapping foxes for their pelts. As a result, Sneade’s trade is legal.

HIT shared images of Sneade’s business that it said had been taken from his previously-public Facebook account. They included Sneade surrounded by dozens of fox pelts, bagged fox furs in a bloodied chest freezer, and the freshly skinned body of a fox with the skinning knife laid on top. It also published footage showing Sneade beating a fox with a wooden stick before standing on its chest to stop its heart. This technique kills the fox without damaging its fur.

HIT also said that, at his home in Pembrokeshire:

Sneade skins and dismembers the bodies, using gruesome knives and stretching racks. He prepares the pelts, using the foxes’ own brain fluid in the process. Numerous pelts are strung out and the stench is palpable from the road. The garden is littered with fox skeletons and he prepares carcasses as bait to entice his next victims in to snare.

I’m helping the environment by keeping the fox population down

The fox population needs keeping down because they do so much damage to ground-nesting birds, also for sheep farmers, they take a considerable number of lambs each year.

It’s got to be done whether people like it or not and the only effective way is to snare them.

And the Independent reported that Sneade said he left the dead bodies of foxes in his garden for carrion birds to feed on. In this way, he said he was ‘recycling’ them. The article went on to say:

He said sometimes he leaves carcasses behind if the fox was suffering mange so the fur is of no use but he removes them later. … Killing them was sparing foxes from mange and disease, he said. And he claimed he shows respect to the animals he kills: “It’s very hard to explain but it’s fairly deep down.”

HIT called for a ban on snares, telling BBC News that they are “inherently cruel on every case”. The public echoed this in its outrage, not only at Sneade’s actions, but at a lack of legislation preventing them in the first place:

This is REVOLTING. How TF is this legal @Conservatives @BorisJohnson @carriesymonds @BlueFoxCAFH???

I can't believe this is still happening in UK… We need to be the voice of the foxes who have no voice. https://t.co/41AcKyAfPj

Foxes are being cruelly 'trapped' for their fur in the UK! 😟

URGENT: sign our petition to ban the sale of fur in the UK. ➡️ https://t.co/b03RPzuAAthttps://t.co/Vz2CQkfWp9

Viewer discretion advised. This is the hideous reality of fur trapping in the UK. https://t.co/t3TVGgHSJQ

This man needs to be stopped.https://t.co/AapIahWxxh

Impact on other wildlife

The National Anti-Snaring Campaign (NASC) has long campaigned to end the use of traps and snares in the UK. It told The Canary:

The Welsh Government’s Environment Committee had considered banning snares in 2016 and the National Anti Snaring Campaign and League Against Cruel Sports gave oral evidence. However, they decided only to promote a “Code of Best Practice”. We know from DEFRA’s own study into snaring where they used code compliant snares, that more non target animals, particularly badgers are caught than foxes. And also that snares were found to be causing serious injury and death. In the best practice guidelines it asks “whether the need justifies their use,” bearing in mind the risk of capture of non-target species and welfare implications.

The group also added that “snaring for profit does not meet the code of practice” and hopes the Welsh government legislates against snares.

The Canary asked HIT if this is practiced elsewhere in the UK. The team said that Sneade is the only confirmed practitioner of this type of trapping for fur, although rumours persist that others may do it too.

This is a clear case of something that’s legal but unethical. It’s unbelievable that fur farming is banned but this is permitted to continue. And, as NASC highlights, the harm caused by traps and snares goes much further than just foxes. The government must take a serious look at the laws on traps and snares right now.