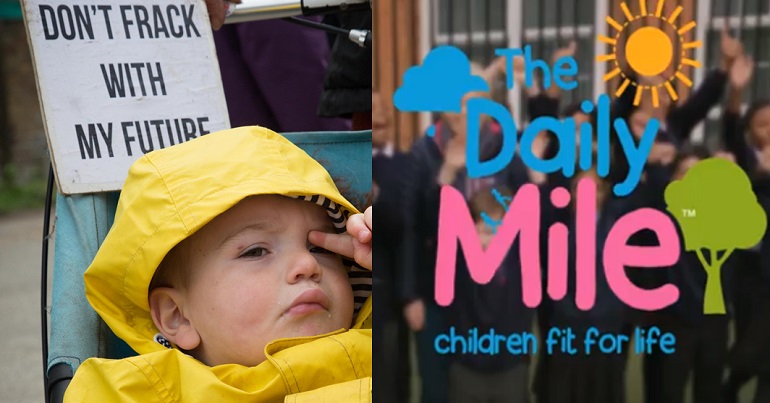 A children’s health charitable foundation is facing criticism for involving itself with a fossil fuel giant; not least because it encourages youngsters to get out in the “fresh air”. But fresh air is something the company involved would know little about because its activities cause, at best, air pollution.

The Daily Mile, a charitable foundation, says it has a “profoundly simple” concept: that children should run or jog for 15 minutes every day, which would often be the equivalent of a mile. It specifically trumpets, without irony, that:

Children run outside in the fresh air…

The irony is that The Daily Mile is partnered with fossil fuel giant INEOS, which wants to operate fracking sites in the UK. Aside from the obvious air pollution generated from burning fossil fuels, fracking (or the extraction of shale gas) is also controversial. Along with its contribution to greenhouse gas emissions, it has been linked to polluted drinking water and earthquakes. Studies have also shown links to low birth weights, premature births and a possible increased risk of breast cancer.

The Daily Mile campaign is also being promoted by ITV; it ran and sponsored an advert on Saturday 7 April during Ant and Dec’s Saturday Night Takeaway. The broadcaster says it wants to:

Get the whole country engaged with this initiative and every UK primary school taking part.

But there are other problems with this partnership aside from the environmental and health ones.

INEOS has repeatedly hit the headlines recently. It is currently taking the Scottish government to court, alleging it has breached its human rights by banning fracking. Farmers and landowners are up in arms about the way INEOS deals with them. The company has also fallen out with the National Trust, who it is also taking to court after the organisation refused to allow it to frack on its sites.

But this is not the first time INEOS has tried to use a children’s health initiative as a PR stunt. As DrillOrDrop reported, schools in Derbyshire cut ties with the firm’s Go Run For Fun initiative, after complaints from parents about the company’s fracking plans in the area.

The Canary asked The Daily Mile and ITV to comment but none was received at the time of publication. INEOS previously defended Go Run For Fun, saying it was:

extremely disappointed by the actions of a handful of individuals in association with anti-fracking groups… Their ‘bully boy’ tactics have put inappropriate pressure onto primary schools… preventing 1500 young children from taking part in an event that can only improve their health and wellbeing.

But people have hit back at The Daily Mile and ITV for partnering with INEOS.

As a qualified teacher and early years’ specialist, I would not involve myself or my children with an initiative like this. I find it disturbing that a company like INEOS should be associated with such a health initiative.

This is completely unethical and we cannot teach our children that this is at all acceptable. Imagine if the tobacco industry sponsored The Daily Mile? There is no difference. In years to come… everyone will be shocked by this.

I would certainly not wish my pupils to be involved in any way with a company such as INEOS. I urge ITV to rethink its involvement with INEOS. INEOS is only doing this as a promotion for itself.

If The Daily Mile wishes to teach children about how to trample over democracy, take governments to court, increase air pollution and pose health risks, then INEOS is the perfect partner. If not, it should, in the words of one campaigner, end this “unholy union”; one which is damaging what would otherwise be seen by some as a worthwhile campaign. Because it seems ridiculous that a company that pollutes the air should be involved with anything that encourages children to take exercise in it.