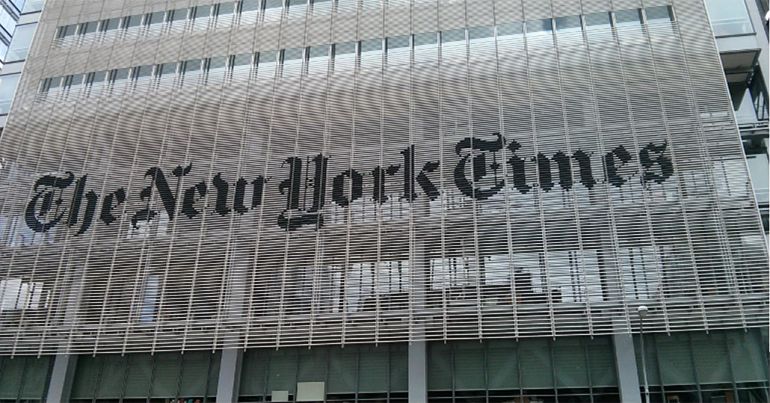 On 5 August, the New York Times Magazine published an article entitled Losing Earth about the history of climate change activism in the US. The paper’s writer-at-large Nathaniel Rich recounts the roles that some key players had in bringing the concept to public and political attention between 1979 and 1989. Amongst these figures are Rafe Pomerance, a Washington lobbyist for Friends of the Earth, geophysicist Gordon MacDonald, James Hansen of the Goddard Space Institute, and a then-thirty-something congressman named Al Gore (who, of course, would later become vice-president and famous in the climate movement for his film An Inconvenient Truth).

Rich argues that the opportunity existed in the late 1980s, when the science had been largely settled and with the issue enjoying bipartisan support, to take the necessary action to contain the impending crisis being caused by carbon dioxide emissions. The front cover of the magazine consists of an entirely blank black page, with one sentence in white across its middle: “Thirty years ago, we could have saved the planet.” Rich suggests that there was a growing movement in the US congress and wider political community to introduce binding international treaties, with the US taking a leadership role.

Or is neoliberalism to blame?

The article, which runs to 30,000 words and took up the entire New York Times Magazine, attracted wide attention and sparked intense debate. But one of the most prominent activists and writers on environmental issues has slammed the article for its characterization of the cause of inaction in averting climate chaos. In an article published by the Intercept, Naomi Klein, author of This Changes Everything: Capitalism vs the Climate, heavily criticized its central premise that “human nature” was the cause of the failure to take action as the 1980s drew to a close.

She argues instead, that the reason for the failure to act at that time was the fact that the widening understanding of global warming coincided with the beginning of the global spread of neoliberal capitalism across the world. Klein rejects Rich’s idea “that the end of the 1980s presented conditions that ‘could not have been more favorable’ to bold climate action”, and argues that the exact opposite was the case. She states:

…one could scarcely imagine a more inopportune moment in human evolution for our species to come face to face with the hard truth that the conveniences of modern consumer capitalism were steadily eroding the habitability of the planet.

And she is categorical in placing the blame squarely on the drive by Western governments to impose neoliberalism on their own populations and those abroad. She says:

Why? Because the late ’80s was the absolute zenith of the neoliberal crusade, a moment of peak ideological ascendency for the economic and social project that deliberately set out to vilify collective action in the name of liberating ‘free markets’ in every aspect of life. Yet Rich makes no mention of this parallel upheaval in economic and political thought.

She concludes that 1988-89 was, in fact, “the worst possible moment for humanity to decide that it was going to get serious about putting planetary health ahead of profits.”

And Klein is right. Reading through Rich’s epically long piece, there are passages which even someone just remotely knowledgeable about climate change could only scoff at. At one point he tells of how Goddard Institute researcher James Hansen found “a funding partner far wealthier and less ideologically blinkered than the Reagan administration: Exxon.”

You read that correctly. The author presents the oil giant Exxon as representing a “less ideologically blinkered” actor than the government of Ronald Reagan on the issue of climate change.

It gets worse. Rich then describes how Exxon sent as its climate change representative to policy discussions “the president of the research division and the former science adviser to Nixon”. And apparently this serves as “an indication of the seriousness with which Exxon took the issue.” This individual then “boasted that Exxon would usher in a new global energy system to save the planet from the ravages of climate change.”

Naturally, Klein roundly ridicules this characterization of the intentions of oil companies and the decision to include them so closely in drafting the policy response to the crisis. She states:

Imagine tobacco executives being repeatedly invited by the U.S. government to come up with policies to ban smoking. When those meetings failed to yield anything substantive, would we conclude that the reason is that humans just want to die? Might we perhaps determine instead that the political system is corrupt and busted?

And Klein isn’t the only one pillorying the article. Think Progress notes how a number of leading scientists, historians and climate experts have attacked it as “historically inaccurate” and “based on logical non sequiturs”. It quotes sociologist Bob Brulle, who points out the naivety of assuming the oil companies were communicating sincerely. He says: “[the article’s] treatment of industry actors is limited to their official statements, and [neglects] their political actions.”

Clearly, this is yet another instance of the mainstream Western media glossing over the corrosive effect that large multinational corporations, and the neoliberalism that enables them, have had on humankind and the planet that sustains it. Klein points to the emerging current of democratic socialists seeking office as representing the best hope we have of genuinely confronting this most important of crises, which threatens the continued viability of organized human life.

– Join The Climate Reality Project or one of the many other environmental NGOs fighting global warming.

– To see information on truly progressive candidates in the US, see Our Revolution and Justice Democrats. If you’re a US resident, you can also join and participate in the activities of the Democratic Socialists of America.