A new coalition hopes to bring life back to Scotland's 'dead, burned and barren' grouse moors - The Canary 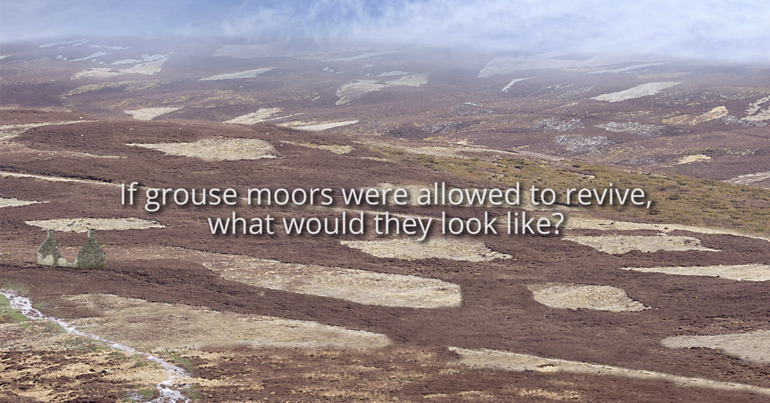 are estimated to cover somewhere between 1 and 1.5 million hectares, amounting to 12% – 18% of the country’s landmass. That means that almost one fifth of Scotland is managed for grouse shooting.

The negative impacts of this are wide-ranging, the report says. Not only on wildlife but on land and the economy too.

Revive is made up of five groups with different but complementary aims:

Senior campaigner Max Wiszniewski says in an article by CommonSpace that the coalition “has been years in the planning”. And it’s now demanding “urgent radical reform of driven grouse moor management”.

As part of its campaign, Revive also released a video showing how different Scotland’s grouse moors would look if not managed for shooting:

The Case for Reforming Scotland’s Driven Grouse Moors exposes the driven grouse shooting industry on a number of fronts. It points out [pdf, p18] that peat moorland, which often lay beneath grouse moors, is an “internationally important” carbon store. And the burning of heather atop these moorlands to improve shooting conditions is:

The report also points to devastating impacts on wildlife. It says that nearly 38,000 mountain hares were killed on grouse moors in 2017. This has left the total population at less than 1% of native levels.

Meanwhile, the effects of raptor persecution on grouse moors are at “population-scale“. Peregrines, golden eagles and hen harriers have all shown population declines in areas dominated by grouse shooting – even when overall national populations have grown.

The Scottish Gamekeepers Association quickly dismissed Revive’s claims. On 6 November, it called the coalition a “wrecking ball” that aims to “put thousands of Scotland’s rural workers and their families on the dole”. But The Case for Reforming Scotland’s Driven Grouse Moors points out that:

grouse-shooting contributes 2,640 full-time equivalent jobs and £30.1 million in wages. … This equates to an average salary of £11,401 which is below the level of the national minimum wage.

Wiszniewski says the Scottish Gamekeepers Association’s statement is “typically hysterical”, bearing “no resemblance to reality”. The report suggests grouse shooting estates may be profiting from public subsidies. Furthermore, it notes that due to a scheme introduced by the Scottish government to encourage small business, many moor owners “pay no rates to the local authority”.

It’s worth noting this claim of jobs was a key argument against the hunting ban in England and Wales. During a 2004 parliamentary debate on the ban, Conservative MP James Gray said: “many people will lose their livelihoods” as a result of the ban. And in 2006 the Countryside Alliance said the ban might “ruin the livelihoods of thousands of people”. But a 2010 report by the Northern Ireland Assembly into the ban said “there had been a minimal loss of jobs” and that the “horse industry did not drop into decline since the ban”.

One struggle, one fight

there’s a chance for both ‘sides’ [environmental and social] to learn from one another and produce a truly holistic alternative to what Chris Packham calls the ‘dead, burned and barren hills of Scotland’.

As a result of putting the social and economic cost of wildlife crime at the forefront of its campaign, Revive creates a united front. But it does this without compromising on its message about animals. And with England’s campaigns against grouse shooting also moving from strength to strength, the grouse shooting industry’s time could be coming to an end.