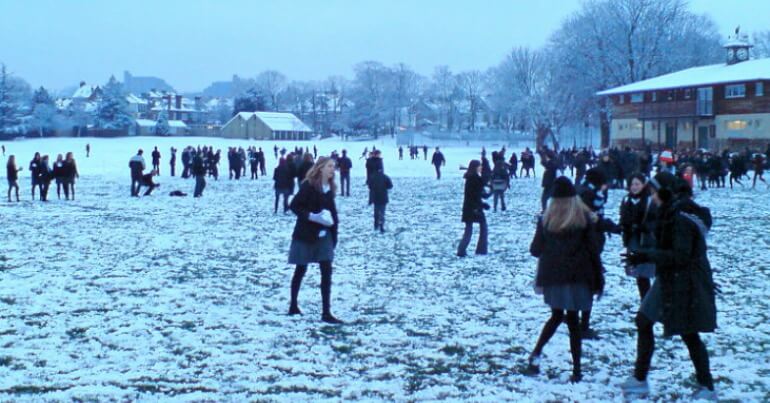 A new report from the National Education Union (NEU) has revealed the extent of the suffering that poverty-stricken schoolchildren face this winter. The findings reveal just how badly austerity is harming the poorest and most vulnerable children in our society.

The NEU findings mirror evidence of growing levels of child poverty in the UK. Over 4.5 million children are in poverty, with over 400,000 more children living in poverty since 2012/13. The suffering is even more intense for schoolchildren across the winter period, as the new report shows.

The NEU investigation polled over 1,000 of its members in order to uncover the realities facing schoolchildren this winter. The results of the investigation showed:

The teachers also detailed harrowing accounts of their pupils suffering. “We are buying them coats on a scale never seen before,” teachers explained. One said:

Kids come in without winter coats even in the coldest weather, or with shoes held together by tape.

Another explained that students turned up to school with “holes in shoes, no outside coat, trousers far too short, holes in clothes, still wearing sandals/unsuitable footwear in November”.

Not just a winter issue

The teachers also expressed wider concerns about poverty all year round, with the report stating that:

“I found out last week that a third of my class sleep in their uniforms as they don’t have pyjamas,” one teacher said. Another stated:

We give free school dinners to children who don’t qualify for FSM (free school meals) because their parents work but have contacted us to say they have no money that day.

A further account explained how a student “wore his trousers backwards as he didn’t want anyone to know he had holes in the knees”.

This is a Dickensian picture of the poverty that far too many children and their families are having to endure. The Government is out of touch with the distressing new reality of children’s daily lives: with what it means to live without enough money for basics, such as food, shoes and adequate clothing…The Government has failed to recognise the human cost of its cuts to schools and other children’s services and to the social security system, and its failure to address the in-work poverty faced by 1 in 5 workers.

The UN Envoy Philip Alston concluded in his recent report that the Government is in a state of denial about the levels of poverty in the UK. The Government must stop hiding from the facts. Children can’t escape the poverty trap without an urgent change to national policies.

Bousted is absolutely right. Over 14 million people are in poverty, with 4.5 million of them being children. Average wages have plummeted, the cost of living has increased, and foodbank use is at record levels.

The recent UN report said that “poverty is a political choice” in the UK. This is true. Successive Conservative-led governments have chosen to inflict “great misery” on people with “punitive, mean-spirited, and often callous” austerity policies. And our underpaid teachers and underfunded schools are left to provide for poverty-stricken children, sometimes even out of their own pockets.

These children’s suffering will only end when radical changes are made; changes it’s clearly unlikely the Conservatives will make. For many children this winter, though, such changes will come too late.