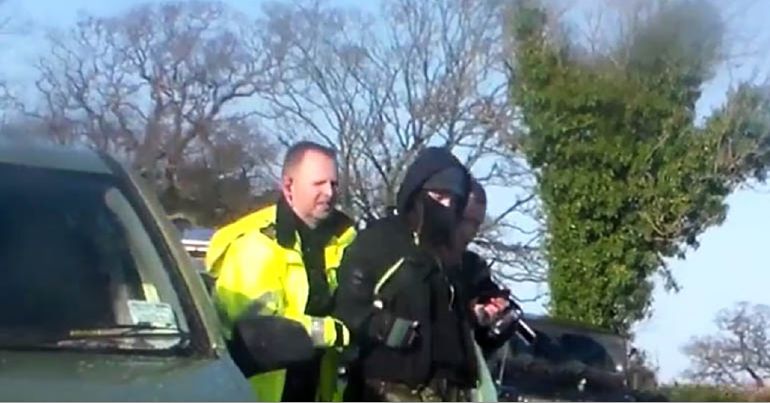 Police settled out of court with an anti-hunting activist for thousands of pounds. It came after they wrongfully asked her to leave an area where hunting was taking place.

North Wales Police issued a dispersal order to hunt saboteurs in the area of Plas Heaton, north Wales, on 24 January 2015. Police arrived after a supporter of the Flint and Denbigh Hunt, Ed Lloyd-Ellis, claimed that Isla Humphrey had assaulted him. The member of Welsh Borders Hunt Sabs (WBHS) in turn claimed she had been assaulted by Lloyd-Ellis. As a result, police ordered Humphrey to leave the Plas Heaton area.

According to the Daily Post, Humphrey was arrested later in the day “on suspicion of aggravated trespass, assault and breaching the dispersal order”. Police arrested a second saboteur, Andrew Edgerton, a member of North Wales Hunt Saboteurs (NWHS). A spokesperson for NWHS told The Canary that the rest of the sabs later left after police also threatened them with arrest.

Video by WBHS shows Sgt Neil Stringfellow issuing the dispersal order. A female camera operator can later be heard describing the order as “completely illegal” to Stringfellow and asking to speak with an inspector. But Stringfellow walks away from the camera.

Philip Kenyon, head of North Wales Police’s legal department, told the Daily Post that the order had the “correct day… but the incorrect date”. As a result, Stringfellow “corrected” the date “in good faith”. But Kenyon also admitted an inspector should have made the correction.

Following this victory, Humphrey and Edgerton chose to hold North Wales Police accountable for its actions. And on 5 March, WBHS said the police had “settled out of court for unlawfully arresting two sabs”. Humphrey received £4,500 in the settlement. However, North Wales Police didn’t admit liability.

Police dropped the aggravated trespass and assault charges against Humphrey before going to court.

The Daily Post reported that North Wales Police said it has a commitment to investigating illegal hunting. But the force also said, echoing words from police in neighbouring Cheshire, that it’s difficult to prove offences because of the law’s complexity.

Meanwhile, the Plas Heaton situation is an example of the ongoing cost to the public of policing an activity that is illegal. Lloyd-Ellis told the Daily Post that the Flint and Denbigh Hunt had been trail hunting. But evidence for trail hunting, a legal activity in which hounds follow an artificially-laid scent, is few and far between. The Canary previously reported on the impossibility of the hunt’s claim to lay trails.

As a result, lawmakers needs to simplify the Hunting Act by stopping hunting altogether. Most importantly, this will save wildlife from the terror of being bred, chased and murdered on an industrial scale. But it will also reduce an unnecessary burden on the public purse.