As May's voice fails like her Brexit deal, calls for a general election grow louder - Canary 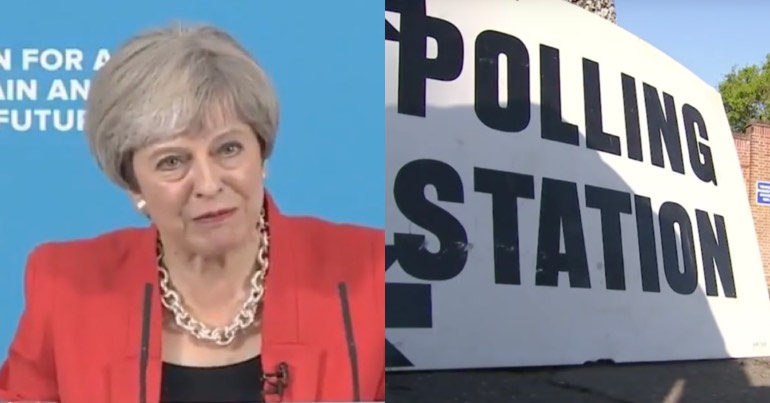 Theresa May’s record of failure will likely peak with another defeat on her Brexit deal on 12 March. And with her voice literally failing in parliament, so too is her disastrous time as PM.

May’s previous Brexit deal defeat was by the biggest losing margin for a government in parliamentary history. And despite her record for clinging on to power against the odds, if she loses, demands for her to call a general election will be deafening.

Despite media claims, May has failed

After May’s previous Brexit deal defeat, she was granted a negotiation extension by parliament via an amendment proposed by Conservative Graham Brady. This amendment gave May a mandate to negotiate “alternative arrangements” on the contentious backstop in Ireland – an issue stopping many MPs supporting her deal.

But it’s now clear that the changes she’s negotiated don’t alter the fundamental legal effect of the backstop arrangement.

Yet, embarrassingly, some media initially repeated government claims that May had, against the odds, secured legally binding changes on its EU deal:

Kier starmer just dismantled the notion that the Tories have changed the withdrawal agreement.

Asked Lidington to refute, he didn't.

It would be nice if news organisations reported facts rather than Tory statements. pic.twitter.com/FnLyssWVSJ

But as Owen Jones pointed out, this turned out to be “nonsense”:

If it wasn't so serious, it'd be hilarious. The British press front pages fawned, Pravda-style, over Theresa May's amazing new concessions, which her own Attorney General has now had to admit are a complete load of nonsense. https://t.co/2oHsu97qF7

The key part of the attorney general’s statement was highlighted by journalist Liam Young:

And as May has failed to achieve the legally binding assurances needed to please her Brexit supporting MPs, she will likely lose tonight’s vote.

This is especially likely, as the BBC’s Laura Kuenssberg claims that the changes achieved are not enough to satisfy the DUP, which secured May’s working majority:

DUP will def vote against not just abstain

If she loses, what comes next?

Although we cannot know with certainty that May will lose, many are asking what will happen next if she does:

It’s over. The deal and perhaps May’s premiership. The DUP & the ERG & Cox have seen to that. What’s extraordinary is that no-one knows what happens next

Sky News’s Lewis Goodall, has spelled out the possibilities should she lose:

Or some combination thereof.

As has the Mirror’s Kevin Maguire:

So: May's bad deal will be defeated tonight a 2nd time, no deal ruled out followed by a UK request to extend Article 50 and delay Brexit.

If PM loses by a significant margin – more than 3 figures – she has some seriously big questions to consider:
– General election?
– Customs union to win over Labour?
– Resign? (doubt it)
– Or one last roll of the dice with the EU before summit next week? Seems pie in the sky. https://t.co/PRD0tNEddi

What all their analyses have in common is the prospect of a general election.

Even Tories are suggesting an election is on the cards

Talk of an election is not just coming from journalists, but Conservative politicians. Described by the BBC as a “senior Conservative”, Charles Walker said the following:

I think if a deal doesn’t get through tonight, I think there will have to be a General Election because this parliament now looks very much like a failing parliament.

And if we can’t decide tonight to leave the EU under the terms that the prime minister has negotiated, then I can’t see really how this government can continue in office. I think she will have to seek a new mandate.

As Steven Swinford of the Telegraph makes clear, Walker is a “staunch defender” of the prime minister:

Charles Walker, vice-chairman of the 1922 committee & staunch defender of PM, says she will have to call election if deal is defeated:

'If it doesn't go through as sure as night follows day there will be a General Election within a matter of days or weeks. It is not sustainable'

Swinford went on to relay more of Walker’s damning words about the Conservative government:

'We cannot continue to behave like this as a Government. It is not fit for purpose

'We are not doing what we need to do, which is govern the country properly. We are letting country down

Worth thinking on this again. Boles & Letwin clear that if May fails tonight it will be the legislature that takes control of Brexit. How could a British PM allow this to happen? (Hence the argument by Walker that we heading to General Election) https://t.co/iNzT1tvC2x

What would an election mean?

Paul Waugh of the Huffington Post claims that many Conservatives at a meeting with May were against another election:

May told the meeting 'no one wants a general election', and won big applause.

But one Twitter user highlighted polling that suggests a majority of people in Britain support a general election:

Actually, lots of people do. Here's what @DeltapollUK found when they asked the public if they wanted a general election (21-23 Feb) ~

Although writer Ian Dunt questions what a general election would achieve in regard to Brexit:

A general election does not answer the question. Strong chance of ending up with another hung parliament. And no basis to claim a mandate for anything on either party, given MPs will operate independently on Brexit issue.

And, considering May lost by 230 votes previously, it is likely that she would not only need to win an election, but win a large majority full of loyal MPs to pass her current deal:

Fascinated to hear from anyone who knows how a general election sorts out any of this crap for The Tories? They need *a hundred* new MPs to overturn deal defeat – and that's if *none* of the new recruits are ERG inclined…I can't see it.

Would an election be good for Labour?

Professor Tim Bale suggests that the Conservatives might think Labour is there to be beaten, if some polls are to be believed:

Wow, a seriously pissed-off Charles Walker MP on @BBCWorldatOne Chairman of the Commons Procedure Committee reckons that General Election follows defeat this evening 'as night follows day'. Not a bad option when the Tories are on 41% and Labour on 31% according to @KantarPublic?

But Jones had a different take on events:

Given Theresa May famously destroyed Labour as an electoral force with a 24 point lead in the June 2017 election she'd be mad not to do it all over again!

And writer Jon Worth painted an optimistic future election scenario for Labour:

Plausible… but not a prediction

2. May goes for General Election, asks EU for short extension to do it

3. Starmer/Thornberry/Watson somehow get Labour to commit to #PeoplesVote in manifesto

A question of honour

Theresa May lost her majority at the 2017 general election. And she’s lost numerous significant votes on her defining issue as prime minister, Brexit. These were reasons enough for her to resign and to call an election. But should she again fail tonight, it will surely be the straw that breaks the camel’s back.

As writer and commentator Bonnie Greer commented, this is a question of honour:

If #TheresaMay was #CountryBeforeParty…she would ask Speaker to call a vote of #confidence re: HM Government and submit her resignation to her Party.

The nation needs a #GeneralElection-in order to save its honour.
This is catastrophic#AttorneyGeneralpic.twitter.com/mmVliIbPMl

Labour overcame a 20+ point polling deficit having been deemed “unelectable” in the previous election. Things have changed. And there is now every reason to believe a new general election will end in a socialist Labour government.