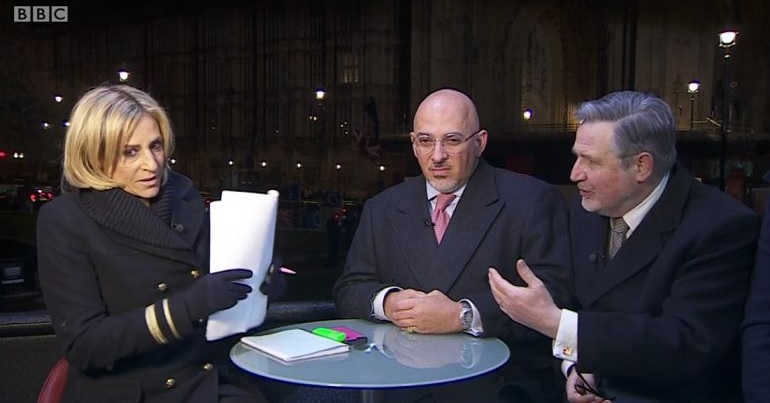 Following a second crushing defeat for Theresa May’s Brexit deal on 12 March, Newsnight‘s Emily Maitlis wasn’t in the mood to mess around. Presenting the BBC programme from Westminster, Maitlis commented that while viewers may be frustrated, “it doesn’t look any better from here”.

This frustration was apparent in Maitlis’s interview style. But she met her match with Labour’s Barry Gardiner. Because he called out the bullshit she tried to ‘slide in’ to paint his party as incompetent. In fact, Gardiner’s reprimand reduced Maitlis to a tantrum.

The BBC Newsnight presenter’s attack line on Labour was clear: it’s been as bad as the Conservative government in coming up with solutions to Brexit.

Speaking about a ‘failing parliament’, she said:

You, the Labour Party, are just as much a part of that as the government.

Why is it down to Labour now to say ‘Okay, I admit our deal was pretty much like the PM’s, and that has been rejected, and we have to go further’?… I’m sorry, but we’re waiting for something proper from Labour

Gardiner was having none of it, though. He responded:

No, no, it wasn’t. I’m sorry… Emily, don’t slide those things in because they’re not true.

The shadow secretary for international trade is right. Maitlis’s assertion that Labour’s proposed deal is “pretty much like the PM’s” isn’t true. Because it crosses May’s so-called ‘red lines’ on Brexit. Most crucially, Labour wants a permanent customs union with the EU.

On BBC Newsnight, Gardiner also pointed out another fundamental difference between his party’s plan and May’s doomed one:

The interesting thing is that the European Union, when we put those things forward, they said ‘This changes the game. This is something that we can work with’.

Going on previous parliamentary maths, the compromise could command a majority.

So it could well succeed in getting through the UK parliament too.

Your democracy, and leaflets, suck

Faced with the total obliteration of her assertions that Labour’s Brexit plan is both crap and similar to the government’s, Maitlis had very little left to attack Labour with. So, she went after its democratic standards and, erm, its ability to design leaflets. She asked Gardiner what Labour would put forward as a “Brexit vision” in its next manifesto. After Gardiner reiterated the plan he’d already spent the last five minutes explaining, Maitlis scoffed:

That’s going to be on the leaflet?

In his response to this ridiculous question, Gardiner then raised the notion that what goes on a manifesto leaflet might be decided democratically. To this, the BBC Newsnight presenter looked to the camera, rolled her eyes, rapped her papers on the desk and started scribbling furiously.

With that little tantrum, she ended the interview with Gardiner. No wonder. She was up shit creek without a paddle by that point.