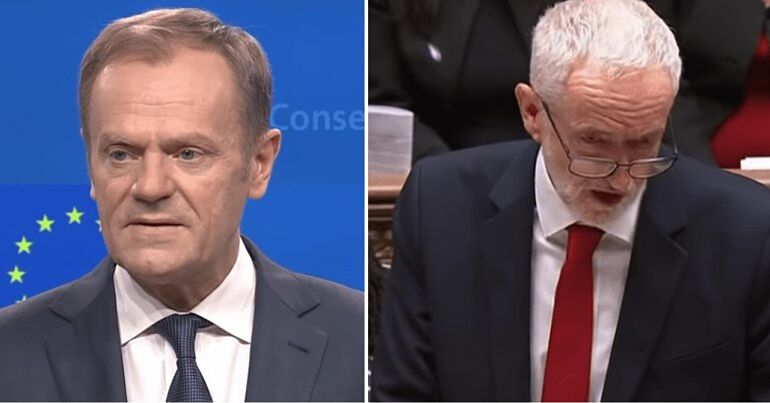 European council president Donald Tusk has signalled that Jeremy Corbyn’s proposals are the only way to stop a no-deal Brexit. With the scheduled leave date of 29 March fast approaching, the UK government may try and extend the Brexit negotiations.

There must be a solution to the Irish border

But now, a spokesperson for Tusk has made clear that the EU will only accept an extension if there’s actually a separate plan being considered:

Ireland and the 26 other EU states would also need to agree unanimously to any extension to the Brexit negotiation process. And Corbyn’s plan includes a new customs union with the EU to solve the issue of the border in Ireland. Indeed, Tusk previously told May that Corbyn’s Brexit proposal could break the parliamentary deadlock. As well as the European council president, the plan has support across the board:

Downing Street has so far not laid out any groundwork for an extension. Instead, Theresa May is still running down the clock in an attempt to force MPs to back her Brexit deal. On 12 March, MPs voted down May’s withdrawal agreement by 149 votes in the fourth greatest defeat of a government in history. European commission president Jean-Claude Juncker has said that the Commons would have “no third chance” on May’s deal.

Corbyn has long offered a Brexit compromise that could move the UK forward. It’s not a stroke of genius, but the obvious solution to the problem. By contrast, May has only dealt in childish political game playing. Back the compromise and get on with it.