It's a Chris Leslie disaster class as he tries to attack Labour, but accidentally attacks his colleague Chuka Umunna - The Canary 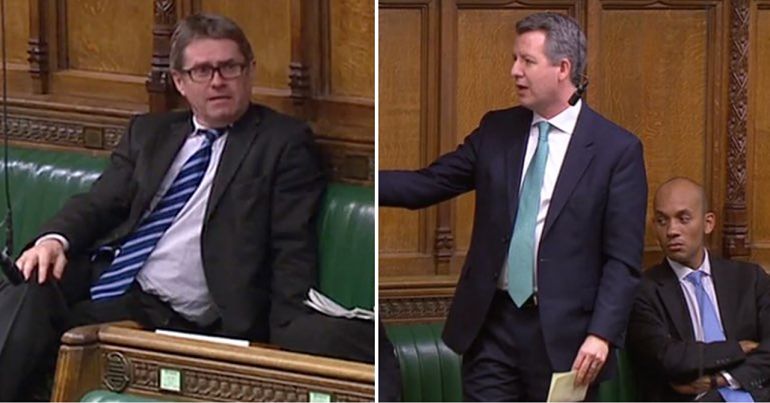 Former Labour MP and now member of the Independent Group (TIG), Chris Leslie, was embarrassed in parliament on 12 March. Leslie was critical of triggering Article 50 and the performance of Labour on Brexit.

Despite running on the 2017 Labour Party manifesto, Leslie has since become an independent. But he’s refused to hold a byelection.

Leslie started his speech during the EU Withdrawal Agreement debate by discussing the failures of the Brexit negotiations:

Here's the bit where he spoke about the huge "errors of judgement", such as triggering Article 50 pic.twitter.com/KxGRlkwdRl

These failures included, he said:

A series of errors of judgement taken, I have to say, by the Prime minister when she decided to trigger Article 50 for example.

Article 50 is the process by which a member state may legally withdraw from the European Union.

Leslie heckled and called out

Leslie then took aim at the Labour party, saying:

I could no longer stay in the Labour Party and stand by with a leadership of the Labour party essentially enabling a Brexit which I know will hurt the livelihoods and the jobs of our constituents.

But Leslie’s diatribe against Labour didn’t go unchallenged. Labour MP for Cardiff West, Kevin Brennan, could be heard shouting back at Leslie:

Chris Leslie just got mugged off by a Labour MP in Parliament.

There he stands, condemning those who voted for Article 50. The usual blah blah about 'failures of the Labour party'

But his own TIG spokesman, Chuka Umunna, supported voting for Article 50! pic.twitter.com/Vrb2jX8avy

Brennan can be heard saying what appears to sound like:

Your spokesperson voted for Article 50.

The TIG “spokesperson” to whom Brennan refers is, of course, none other than Umunna.

Leslie was finally forced to react. Brennan said to Leslie:

You voted for Article 50.

To which Leslie replied:

No, but your spokesman did, your leader did.

It’s true that Leslie didn’t vote for the Brexit Bill that allowed Theresa May to trigger Article 50. But he didn’t vote against it either. Instead, he simply didn’t vote. And yet 52 other Labour MPs felt strongly enough to defy Labour’s three-line-whip and vote against the bill.

But Leslie’s colleague and spokesperson for TIG, Umunna, did vote to trigger Article 50. In fact, he wrote a joint article about doing so, with fellow Labour right-winger Wes Streeting.

In it they said:

We believe as democrats that we must abide by the national result, which is a clear choice to leave the EU.

And so, with a heavy heart, we both voted to trigger Article 50 and begin the process of leaving the EU.

And further still, Umunna argued in 2016 that the UK should leave the EU single market if it could not stop freedom of movement of people. Yet despite this history, Umunna has now become a pin-up boy for the People’s Vote and Remainer movement.

Leslie failed to respond to a request for comment on this matter.

Leslie and Umunna attempt to present themselves as long-term Brexit resisters who fought against a pro-Brexit Labour Party machine. But their records show otherwise. And Brennan calling out this history is long overdue.

But it’s doubtful that a media that seems so smitten with TIG will point out these obvious truths anytime soon.