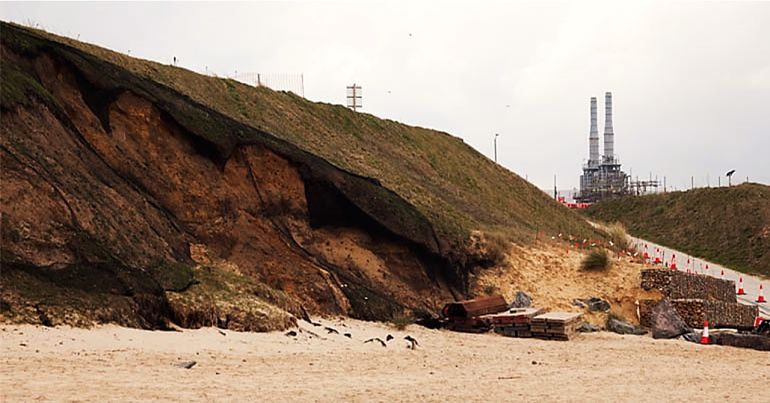 A small coastal village in north Norfolk has become the centre of a debate over Britain’s attitude towards wildlife. The council has permitted major earthworks to prevent further erosion of the cliffs at Bacton. But netting used to stop birds from nesting in the cliffs prompted outrage across the country.

Bacton is home to a major gas terminal operated by several companies including Shell. In December 2018, North Norfolk District Council (NNDC) approved works to “protect” the terminal from coastal erosion. The work, modelled on the Zandmotor project in the Netherlands, requires nearly two million cubic metres of sand to be placed along Bacton beach.

Part of this project included 1.3 km of netting along Bacton’s cliffs. NNDC said the netting would “encourage sand martins to nest further along the coast”. The birds fly from their wintering grounds in Africa to breed during Britain’s spring and summer. Migration kills some and leaves many exhausted just so they can reach their nesting holes. But on 8 April, Twitter user Bea posted a video of a sand martin at Bacton unable to reach the holes in the cliffs:

RSPB East shared Bea’s video on the same day and said it was “heart breaking to see that [NNDC] have not taken our… advice”. On its website, RSPB said it originally recommended ‘geotextile meshing’ to “ensure no birds can be trapped”. But the organisation said NNDC instead used “netting, not geotextile… with no indication as to… alternative nest sites”. Ecologist writer and young nature advocate Bella Lack also shared Bea’s video. Between RSPB East and Lack, tens of thousands of people shared the video and shot the issue to national attention.

Meanwhile, NNDC issued a statement defending the use of nets. On 8 April it said the nets were installed after the “advice of professional environmental agencies” and a “detailed environmental assessment”. NNDC also said it had “strategically placed” the netting over the “minimum area” required by the project. However, on 9 April, the council announced it would “remove the upper levels of netting” from the cliffs.

National media including the BBC, Independent, Daily Mail and Telegraph covered the story. Politicians weighed in including shadow education secretary Angela Rayner, who asked NNDC to remove the nets. Zac Goldsmith said the situation was “completely revolting”. And North Norfolk MP Norman Lamb said he was taking action on the matter.

Birder Richard Thewlis said he estimated the netting covered 349 sand martin nest holes at Bacton. Thewlis said the outcome would be a “complete failure” for this year’s breeding season. And the result would be devastating because, as Twitter user Dolly pointed out, a sand martin’s average lifespan is just two years.

Netting is now a major wildlife issue, sparked in early 2019 by photos of trees and hedges covered in the material. People are horrified at the message it sends out about Britain’s attitude to wildlife. As Twitter user Mel Lloyd said, Bacton’s netting displays a “cruelty towards nature” by the country’s companies and officials. And the irony of a fossil fuel plant requiring work to protect it against the destructive effects of climate chaos wasn’t lost on some.

While NNDC agreed to remove the netting’s upper levels, many including the RSPB and Wildlife Trusts have condemned the council for letting more than a kilometre of netting to remain. Britain has already experienced widespread decline of much of its wildlife. Bacton’s nets harm a single colony of sand martins. But they are a stark example of the cruelty our practices are having at a much bigger scale – as well as of people’s willingness to fight back.

Featured image by Glen Black for The Canary